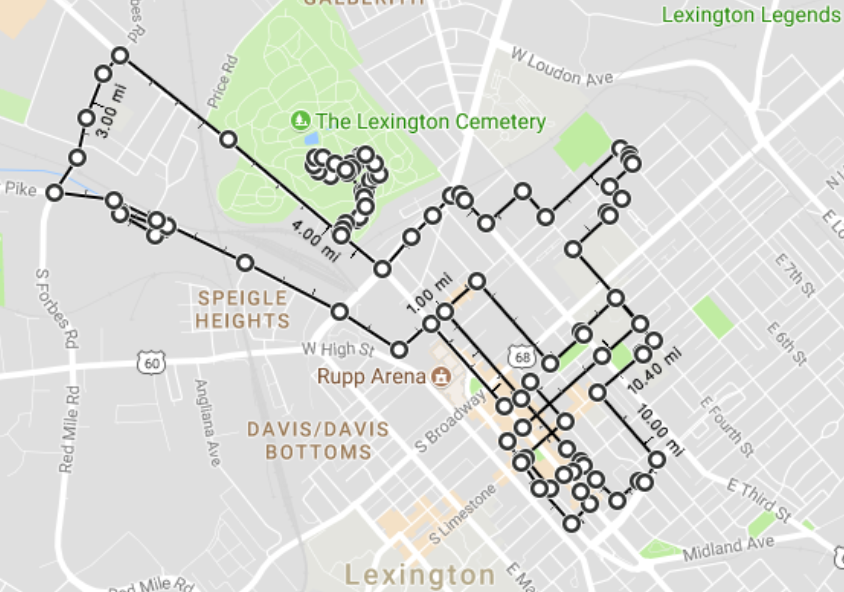 For those that have followed this blog for some time, you know I think that Lexington is an amazing city. Whenever my sister comes to visit, I love taking her on a bike ride to show her what has changed in the city where we spent so many years growing up. So we did Lexington by bike.

We ventured recently on a 5-hour, 10.4 mile tour (no-destination-style at an ultra-leisurely pace) with just a couple of targets in mind: we wanted to enjoy a couple brews from stops on the Brewgrass Trail. I wanted to show her what’s going on in the Distillery District and we wanted to pass our old Kentucky home.

We pulled our bikes off the bike rack where we parked on North Limestone in front of LTMS. We passed the old the old Episcopal mission on Fourth Street before cutting through the campus of Transylvania University and beside Old Morrison.

Gratz Park until Second Street when my sister declared she wanted to pass her favorite house in Lexington, the Thomas January House.To Jefferson Street where, upon cresting the viaduct, I showed my sister how the Lexington Center would expand and the beautifully proposed Town Branch Park would overtake the area.

In, through, and past the Distillery District, we turned right onto Forbes Road and discussed the fire at the stockyards. Her mind raced as she considered the potential reuse for that 10 +/- acres.

Down Leestown Road and into the Lexington Cemetery where I told her the stories of King Solomon, of John Hunt Morgan, and of Henry Clay. As we left the cemetery and with five miles behind us, we began to think about that first beer. To Blue Stallion!


The Hefeweizen was the perfect beer on that hot day! We filled our waters and immediately embarked for pint #2 at West Sixth (and for a bite at Smithtown Seafood!) We journeyed down Smith and Willie Streets before taking in the rainbow colored shotguns on Bourbon Street – the highlight of what remains of historic Smithtown for which the seafood restaurant takes its name!

I, of course, gave her an update on the Old Courthouse as we passed it. Then to our old Kentucky Home in the Historic Western Suburb, the iconic mural of Abraham Lincoln by Eduardo Kobra, and the new Henry Clay mural on Vine Street.

We learned that East Second Street Christian Church is contemplating a new site (according to the “Future Home Of…” sign) before admiring their circa 1875 church building.

Another stop during the day was a new one for me: The Lexington Visitor’s Bureau which has relocated to The Square (formerly Victorian Square). If you are visiting Lexington for the first or fifty-first time, stop at the Visitor’s Bureau. You’ll discover something new!

Of course, isn’t that always the case with Lexington? We certainly did during our 10.4 mile ride. #sharethelex