“A full book could be written on the structures that stand (or once stood) in and around Gratz Park. Most notably, the primary structure of what is now Transylvania University once stood in the center of the park. Designed by architect Matthew Kennedy, the three-story academic building was constructed in 1816 but burnt to the ground in 1829. After the fire, Transylvania retreated to the north side of Third Street.”

That’s a snippet from Chapter 1 of Lost Lexington – a chapter that discussed the Hart-Bradford House that once stood on the southwest corner of Second and Mill streets until its demolition in favor of a parking lot in 1955.

In the wake of that demolition, a committed group of committed citizens came together to organize what would become The Blue Grass Trust for Historic Preservation. And the city of Lexington established Gratz Park as the city’s first historic district three years later in 1958.

The effort to preserve the structures around Gratz Park, an effort begun by the 1955 demolition of the Hart-Bradford House, jumpstarted the historic preservation movement in central Kentucky.

For this month’s BGT deTour, we’ll explore the history of Gratz Park with guide Carolyn Hackworth, the leader of www.lexwwalkingtour.com. If you make it, please help the BGT promote the event before, during and after the deTour by using #BGTdeTours on social media! Thanks!

In the words of Kentucky architectural historian Clay Lancaster, “the park has charm, atmosphere, a sense of tranquility and of history, and it provides an oasis of planting tucked into the cityscape.”

And it has a lot of history. 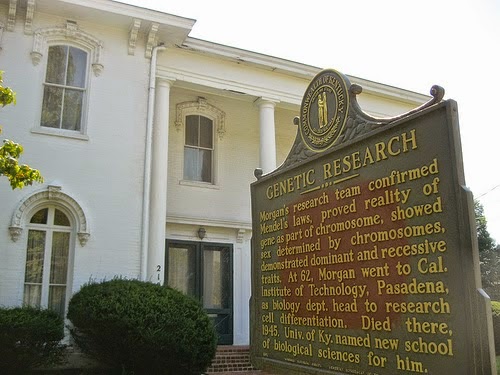 After Gratz Park, the group will retire for a house tour of the newly-restored Thomas Hunt Morgan House where light refreshments will serve as tonight’s AfterHour. Thomas Hunt Morgan grew up in this ca. 1870 McMurtry-designed Italiantate which has had multiple additions, notably an auditorium (ca. 1912) and dining hall (ca. 1970) have left many more square feet than originally included in the McMurtry design. Utilized for many years by the Women’s Club of Central Kentucky, the house was deeded to the BGT in 2014 reuniting two parcels of John Wesley Hunt’s property once again. For more on the Thomas Hunt Morgan House and Nobelaureate Thomas Hunt Morgan, click here.

And although an RSVP isn’t necessary, you can join the event on Facebook: 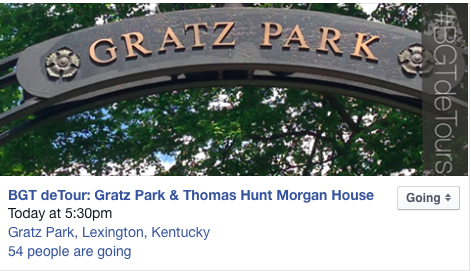 The award-winning BGT deTours program is designed to provide tours of places you might not normally get to see, helping people interact with and learn about sites that make the Bluegrass special. For young professionals (and the young at heart!), deTours are always the first Wednesday* of the month at 5:30 pm*, and are always free and open to the public (*exception being holidays, weather and out-of-county locations).