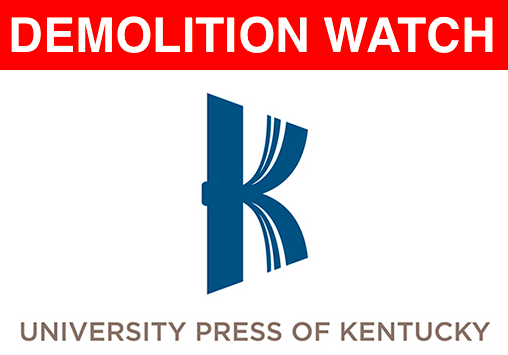 The University Press of Kentucky just celebrated its 75th birthday, but it is celebrating it’s birthday on a list of 70 state agencies whose budgets are being slashed by Governor Bevin.

Some agencies may hobble along without the state funding, but it would seem even those that have alternative revenue streams (like book sales) would likely close if the governor’s proposal is made law.

Tom Eblen’s column draws attention to what this closure would mean – to the Press and to the Commonwealth – if the Press’ $672,000 budget allocation were gone.

The 50 books or so published each year by the University Press are a diverse collection that tell America’s history and Kentucky’s history. They explore the oft-untold culture of Appalachia in an honest way.

Because telling Kentucky’s story is fun. And that is something at which the University Press of Kentucky excels. I’m looking forward to Randolph Paul Runyon’s The Mentelles: Mary Todd Lincoln, Henry Clay, and the Immigrant Family Who Educated Antebellum Kentucky which is due out in May 2018. In it, the author “studies the understated pair” of Augustus Waldemar and Charlotte Victoire Mentelle who arrived in Lexington in 1798 where they began Mentelle’s School for Young Ladies, “an intellectually rigorous school that attracted students from around the region and greatly influence its most well-known pupil, Mary Todd Lincoln.”

Tom Kimmerer’s Venerable Trees presents a complex, scientific matter in simple, readable prose that educates and informs the arborist, the history buff, the preservationist, and those who love Kentucky’s natural beauty. It was published by the University Press of Kentucky in 2015.

The beautiful 596-tome that is the Kentucky African American Encyclopedia is a “foundational guide  to the black experience in the Commonwealth.”

And in A is for Appalachia!, children take an alphabetical exploration through the traditions and culture of Appalachia. I first read it to my children in 2014 and as recently as this month.


The poetry of George Ella Lyon, who regularly publishes with the University Press, makes walls talk as she did in Many-Storied House.

Even a textbook on Appalachian linguistics, Talking Appalachian, remains forever in my mind because of Anne Shelby’s complaint that the computer’s spellcheck feature turns ‘homeplace’ into someplace.

And these are just some of the stories, books, and genres that the University Press of Kentucky brings to life each year. And now it’s at risk, so I’ve placed it on the Kaintuckeean’s #DemolitionWatch.

Kentucky must continue to invest in education and in its culture and in the University Press of Kentucky.