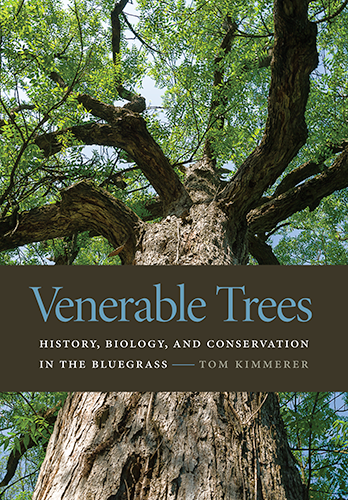 I first learned of Tom Kimmerer and his work during the late summer and into the fall of 2014 with the news related to a Ball Homes’ development near Harrodsburg Road and Military Pike that threatened a nearly 500 year-old bur oak. The developer hired Kimmerer to create a preservation plan for this ‘venerable’ tree which stands on a bluff above the old South Elkhorn schoolhouse. For the tree preservation plan, Ball Homes earned an award from the Lexington-Fayette Environmental Commission.

And the premier guidebook for the preservation of trees was recently published by the University Press of Kentucky. The author, not surprisingly, was Tom Kimmerer. Kimmerer’s Venerable Trees: History, Biology, and Conservation in the Bluegrass is a self-described “celebration of the long relationship between people and trees and a cautionary tale of what happens when we neglect that relationship.”

In Venerable Trees, Kimmerer harkens to the early days of Lexington when settlers like Robert Patterson and Josiah Collins felled significant bur oaks and walnuts to construct first a blockhouse and later cabins like the one standing today on the campus of Transylvania University.

In one particular image, a detail of the Patterson Cabin shows the grain on an old oak log that “may be one of the original bur oak pieces used to build the cabin.” Through the page, the history of the building speaks volumes but so does the ancient history that occurred while that tree grew before being cut down for utility by mankind.

The image immediately conjured, for me, the fire, demolition, and removal of the Lady Sterling House in Nicholasville. An 1804 structure which burned in 2014, the burnt original timbers showed their age. Of that loss, I wrote:

But the log cabin which had withstood over 200 years of history and two other major fires seemed resilient. It might be able to be preserved.

The logs had been cut and hewn by hand. The trees from which those timbers came could have stood several hundred years before the trees were felled. If the log cabin couldn’t have been reclaimed, those logs could have perhaps been rebuilt on the same or another site. Or the logs could have been repurposed and reclaimed in other ways.

The timber of this building spoke to me, but I’ve largely neglected to consider the honorable tree in my passion for preservation. But our venerable trees should not be forgotten – they should be preserved.

Truly, Venerable Trees is not what I expected. I expected that the book on biology would read like a textbook and would appeal only to a narrow subset of the population whose passion involves counting tree rings. And without a doubt, this book will appeal to those individuals as well.

But Kimmerer does a fabulous job of presenting complex matters in simple, readable prose. The stories of particular trees both in the Inner Bluegrass Basin and in the Nashville Basin are told alongside an understanding of how different species of trees reproduce, how that reproduction is aided by the natural environment, and with an emphasis on the importance of these significant natural monuments. All with a good collection of both black-and-white and color photographs.

Venerable Trees is highly recommended for the arborist, the history buff, the preservationist, and those who love Kentucky’s natural beauty. For more about Tom Kimmerer and his work, visit his website.