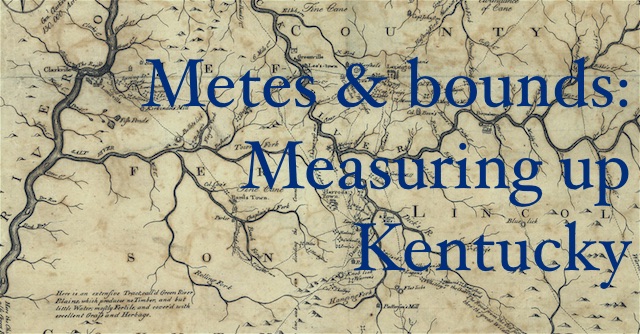 Used for centuries in England, the system of describing land by its metes and bounds is a common way of describing an area of land. Surveyors and other professionals utilize the system to specifically identify parcels of land though errors by the early surveyors creating much trouble in the early days.

Even with today’s surveys being done largely with technological advantage, it is possible for a call to be reversed and the wrong parcel be conveyed or mortgaged. The system of measured, however, is best understood by looking at the historic nature of how Kentucky itself came into being.

In preparing for a presentation on the history of Lexington, I reviewed an online timeline of Fayette County. I’ve referenced this timeline before. It is a useful resource, but I questioned its first referenced fact when it suggested that the first Virginia charter (1606) included the territory that would become Kentucky.

Letting curiosity get the best of me, a quick Internet search offered a map of King James’ grants to the Plymouth and London Companies in 1606. As I suspected, they didn’t include the lands that would become Kentucky. A website called Virginia Places explained that the London Company “shall have all the landes, soile, groundes, havens, ports, rivers, mines, mineralls, woods, marishes, waters, fishinges, commodities and hereditaments whatsoever, from the firste seate of theire plantacion and habitacion by the space of fiftie like Englishe miles.“

we do also of our special Grace… give, grant and confirm, unto the said Treasurer and Company, and their Successors… all those Lands, Countries, and Territories, situate, lying, and being in that Part of America, called Virginia, from the Point of Land,from the pointe of lande called Cape or Pointe Comfort all alonge the seacoste to the northward two hundred miles and from the said pointe of Cape Comfort all alonge the sea coast to the southward twoe hundred miles; and all that space and circuit of lande lieinge from the sea coaste of the precinct aforesaid upp unto the lande, throughoute, from sea to sea, west and northwest; and also all the island beinge within one hundred miles alonge the coaste of bothe seas of the precincte aforesaid. (emphasis added)

From sea to sea, eh? In these pre-Lewis & Clark days, there was still little concept of just how wide the continent truly is. The boundaries of Virginia evolved over the next century-plus before settling on the more familiar lines when, in 1784, Virginia ceded claims to northwestern lands to the U.S. government. At this point in history, Virginia consisted of the modern states/commonwealths of Kentucky, Virginia, and West Virginia.

Virginia: Breaking Up is Hard to Do

Kentucky arose from a still-extant Virginia county: Botetourt County which has been massively carved up over the centuries. Botetourt County was created in 1770, but the area that would become Kentucky was extracted in 1772 to become a portion of Fincastle County.

Fincastle County, which existed only through the conclusion of 1776, was carved up into three counties: Washington County (now exclusively part of Virginia), Montgomery County (which included parts of present-day Virginia and West Virginia), and Kentucky County.

Dr. Thomas Clark wrote, quoting Thomas Jefferson, that “obtaining justice should be made safe and easy as possible to all citizens.” It could be said that one reason for our declaration of independence from King George III was to achieve that dream of safe and easy justice. Of course, nothing about achieving justice has come with safety or with ease. Despite the challenges, shedding the chains of tyranny has become an American battle cry. This question framed the debate at our nation’s founding. And it framed the debate for Kentucky’s ultimate statehood.

Kentucky County survived only until 1780 when it was replaced by Jefferson, Fayette, and Lincoln counties. There was, at the time, a separate land claim for part of this area: Transylvania. 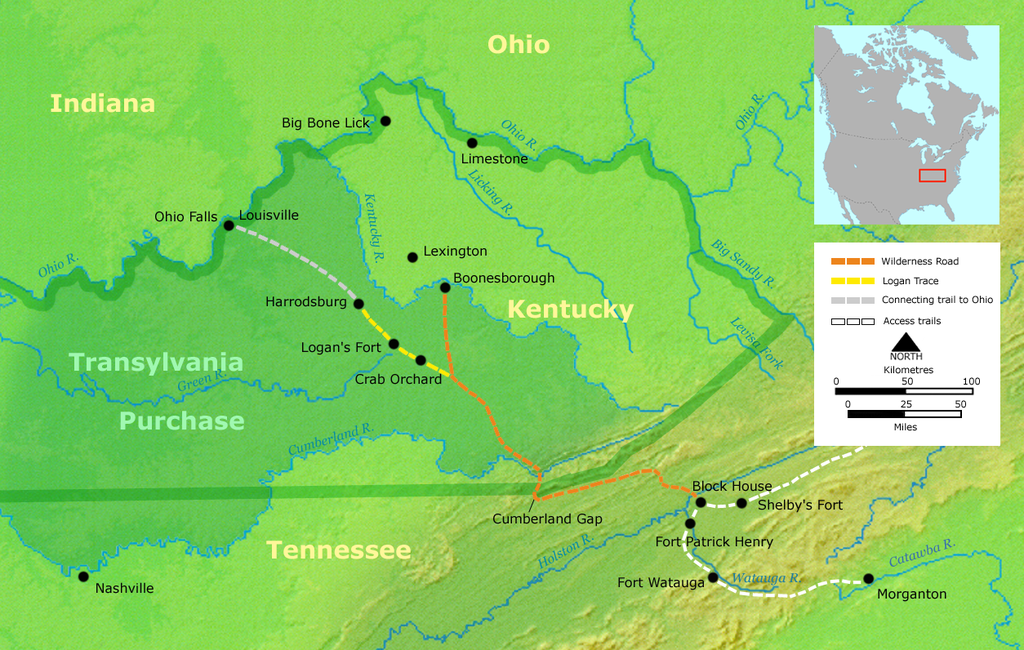 Richard Henderson, a North Carolinian, led the Louisa Company (rechartered as the Transylvania Company) to secure the Treaty of Sycamore Shoals in a land purchase from the Cherokees. The treaty was signed on March 17, 1775, and could have given rise to the State of Transylvania, but these claims were disputed. Much of the land lied in the portion of Fincastle County that would become Kentucky County.

In 1778, Virginia invalidated all title to land arising through the Transylania Company. North Carolina followed suit in 1783. In the interim, the national government sought to clarify the boundaries in the territory northwest of the Ohio River.

To these ends, Virginia gave up its land claims in this area on January 2, 1781, but it also required Congress to take several actions including the affirmation of Virginia’s boundaries and the claims of her citizens within that area. Further, Virginia required that all other claims arising from arrangements not ratified by Virginia (read: the Transylvania Company) would be rejected.

In the end, the State of Transylvania would not rise with its validity being rejected by Virginia, the United States, and even North Carolina. 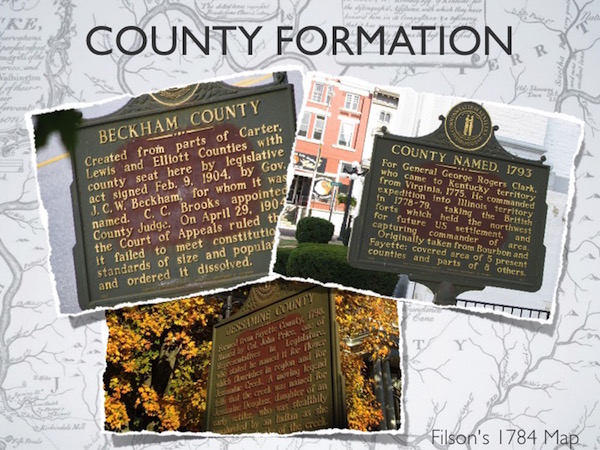 On June 1, 1792, Kentucky was admitted to the Union with the permission of the Commonwealth of Virginia. At the time, there were eight counties. Today, there are 120 counties.

The division of Kentucky’s territory into counties has not been without controversy either. Just as the separation of America from England and Kentucky from Virginia were precipitated by the need for local governance, so too was the case with the creation of many of Kentucky’s counties.

In 1798, the residents of Marble Creek labored “under great inconveniences from their detached situation from their present seat of justice.” They sought the creation of a new county. From their efforts spawned by a dispute with the leadership in Fayette County, these Jessamine Countians carved a territory Fayette.

And beginning around 1900, the people of western Carter County around Olive Hill did not appreciate the 30 or 40 mile journey to the county seat of Grayson. Olive Hill was becoming populous given the fire brick industry developing in that portion of the county. And political disputes also suggested a division. On February 9, 1904, the governor signed into law the formation of Beckham County out of portions of Carter, Elliott and Lewis counties with Olive Hill being designated as the new county seat.

Though the name wouldn’t be known for a significant portion of the epoch, Kentucky’s geopolitical and cartographic history spans more than four centuries. Today, the boundaries are governed by Chapter 1 of the Kentucky Revised Statutes – statutes which reference U.S. Supreme Court decisions decided as late as the 1980s. And within these boundaries, Kentucky has been divided into public and private lands.

Surveyors and others have called the points which would make these divisions. Since 1983, the state legislature has authorized the use of GPS coordinates in addition to the metes and bound system which has added accuracy to the whole system.

Yes, the “sun shines bright on my old Kentucky home” as measured from the “stone at the seven pines” and beyond.

The 745 acres of Harrison County land provides the purest glimpse of what Europeans first saw when the entered the Bluegrass region. This is what the land looked like when the Native Americans lived here. Griffith Woods is a cooperative effort between the Nature Conservancy, the University of Kentucky and the Kentucky Nature Preserves Commission. Originally called Silver Lake Farm, the area features some venerable trees that are more than 300 years old.

One post from September helped to catch readers up on the many demolitions that have occurred around Lexington over the past couple months. Significantly, the circa 1875 farmhouse at Fritz Farm near the corner of Nicholasville Road and Man-O-War was demolished to make way for the future mixed-use development known as The Summit at Fritz Farm.

Lost Lexington at the University of Kentucky

This post was a promotional post for an event I had at UK’s Singletary Center to speak about my book, Lost Lexington. What made the event more special was that it was the inaugural event in the Hemenway Writing Center Speaker Series! It was a great event with a great group of attendees who asked some great questions!

“Every place you go has a story to it.” @kaintuckeean #LostLexington

3,849 Images from Lexington’s Past

A guest post from the archives, written by Michael Monks of RCNKy.com, is about the Riverside Historic District in Covington. This treasure includes eight blocks along the Licking River beginning at the confluence with the Ohio River. Architecture of the “Greek Revival, Federal, Queen Anne, High Victorian, Gothic, Italianate, and French Second Empire styles” can be found here. Like many churches in the region from both the Baptist and Disciples of Christ traditions, Silas Baptist draws from the heritage of the Traveling Church which was founded in Virginia in 1767.  This July 2010 offers image and text from the on-site historic marker with a little extra insight on this oldest continuously running church in Bourbon County.