General John Hunt Morgan, the Thunderbolt of the Confederacy, is a favorite Civil  War general among many Kentuckians. In Lexington, the statute of him upon his steed is the only one in Kentucky with a mounted Civil War soldier or officer.

In Cynthiana, site of two Civil War battles (both involved JHM), a bridge “honor[s] famous Confederate calvary leader.” Opened to traffic on October 8, 1949, the General John Hunt Morgan Bridge was dedicated in 1950. It replaced a wooden, covered bridge which had been erected in 1837. Closed in 1944 and the flooring and sides removed, daring teenagers attempted to cross the skeletal remains of the covered bridge in 1946. Four drowned. In December 1948, that bridge was pushed into the river and construction began on the present bridge. [*] [*]

The bridge crosses the south fork of the Licking River.

745 acres of protected Harrison County land provides the purest glimpse of what Europeans first saw when the entered the Bluegrass region. This is what the land looked like when the Native Americans lived here. Griffith Woods is a cooperative effort between the Nature Conservancy, the University of Kentucky and the Kentucky Nature Preserves Commission. It is the centerpiece of the Bluegrass Restoration Project, an effort dedicated to returning as much of the Bluegrass to its original state. This effort is particularly important as the Bluegrass region was listed as endangered in 2006 by the World Monuments Fund (of course, the WMF was referring to horse country, not the natural habitat).

Originally called Silver Lake Farm, both the farm and the Griffith family were key figures in the early days of both the Commonwealth and the county. In the early 1900s, owner and farmer William Griffith preserved a portion of his land which today stands as the largest oak-ash savanna in Kentucky. Many of the blue ash, chinquapin oak, bur oak, hickories and black walnut trees are over 300 years old. In fact, the world’s largest chinquapin oak is at Griffith Woods. Fenced off, except for private tours, the view above is from the gate. There is also an  abandoned home/tavern which was built around 1822.[*] It appears that UK and the Harrison County Fiscal Court might restore the tavern as well. Check out my other pictures of Griffith Woods @flickr.

In 1798, land was given to the Cooper’s Run Church by Charles Smith, Jr. Two years later, 20 congregants left Cooper’s Run to form Silas Baptist Church. For fifty years, the church worshipped in a log structure. In 1850, the present brick structure was erected (with significant remodeling done in 1902). It is the oldest, continuously operating church in Harrison County.

The church is a member of the independent, Elkhorn Baptist Association. Marker 1596 reads:

Organized by 20 members of the Cooper’s Run Church in 1800, with the help of Ambrose Dudley, George Eve and Augustine Eastin. They built at this site on land given, 1798, by Charles Smith, Sr. The log structure was replaced by a brick house of worship in 1850 and redecorated in 1902. It is the oldest church in the county continuing without interruption.

Check out my other pictures of the Silas Baptist Church on Flickr!

Walter Scott, aka Death Valley Scotty, was an adventurer in the greatest sense of the word. He was a part of Buffalo Bill’s Wild West Show, held the record for rail travel from 1905 to 1934 (44h:54m; LA to Chicago), and was a fantastic schemer. His fictitious Death Valley gold mine brought in many investors, including the president of National Life Insurance Company of America (Albert M. Johnson). Johnson followed Scott to Death Valley and Johnson’s wife convinced him the weather was good for his health. Though Scotty claims it was built for him (and is so named), Johnson erected Scotty’s Castle (left, photo by K. Repanshek). The castle was constructed at a cost of $1.4 million is now owned by the federal government.

Scott, for all his frauding and scheming, never spent much time in jail. He is buried on a hill overlooking Scotty’s Castle.

Born in Cynthiana in November of 1928, Joe B. Hall went on to both play for and coach his beloved University of Kentucky Wildcats. He played on the 1949 and coached the 1978 National Championship teams. While UK’s coach, he compiled a record of 297-100 and three trips to the Final Four.

Coach Hall is a beloved figure in Kentucky athletics but the love for Joe B. is no greater than in his hometown of Cynthiana. In fact, the courthouse square (pictured above) was dedicated as “Joe B. Hall Court” in his honor in November 1994.

This isn’t just the oldest house in Cynthiana; it has served as so much more. So, Nate was right; I did really like the old log courthouse at Cynthiana’s courthouse square. The historic marker 1539 reads:

The marker, however, misses so much of the tale. Built by Dr. James McPeters in 1790, the building also served as the county’s first courthouse. [*] There, the county’s first murder trial was heard. The accused, Adam House, was defended by Henry Clay. Here is some more background from Mrs. L. Boyd’s Chronicles of Cynthiana (1894): And, not surprisingly, the place is haunted. 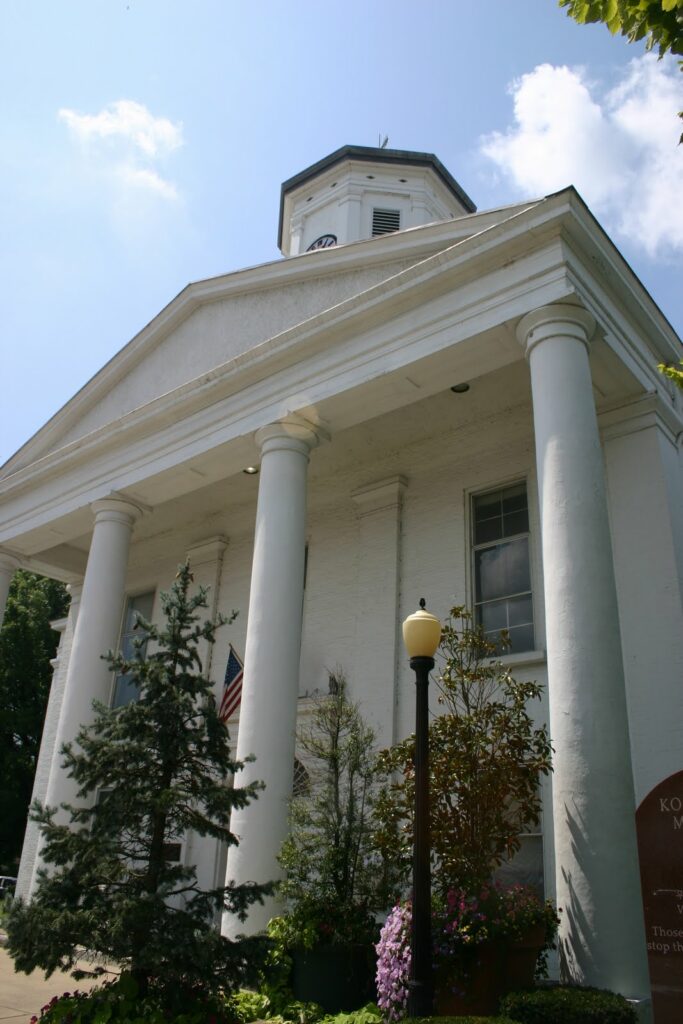 I set out this morning knowing that I would drive to Cynthiana to begin my trip through the east/central part of the Bluegrass, but I really had no idea what I was in for. I must admit that I got a bit lost on the way to Cynthiana, but getting a little lost was probably the best thing I could have done. This area of Kentucky is absolutely gorgeous. If you want to see some of the most beautiful stone fences and rolling countryside, follow my route. It was amazing. What continues to suprise me on these trips is how completely distinct different areas of Kentucky are. Owen County and Harrison County nearly touch each other, but they couldn’t be more different in geography.
Anyway, Cynthiana is a pretty little town, with a motto that is something like “A town as beautiful as its name.” I learned at the courthouse that the origin of the name “Cynthiana” is actually a pretty interesting story. According to the plaque on the courthouse, Robert Harrison (interestingly, not the county’s namesake, but the man who donated land for the courthouse square) had two daughters – Cynthia and Anna. Combining the two names gave us the name of the county seat.
According to the sign on the courthouse, the present courthouse is the third – built in 1853 with the clock and bell added in 1856. Wings were added in 1914, and it was listed on the National Historic Register in 1974.
What keeps surprising me about this project is how many times I find myself thinking “I could live here.” Cynthiana was no exception. 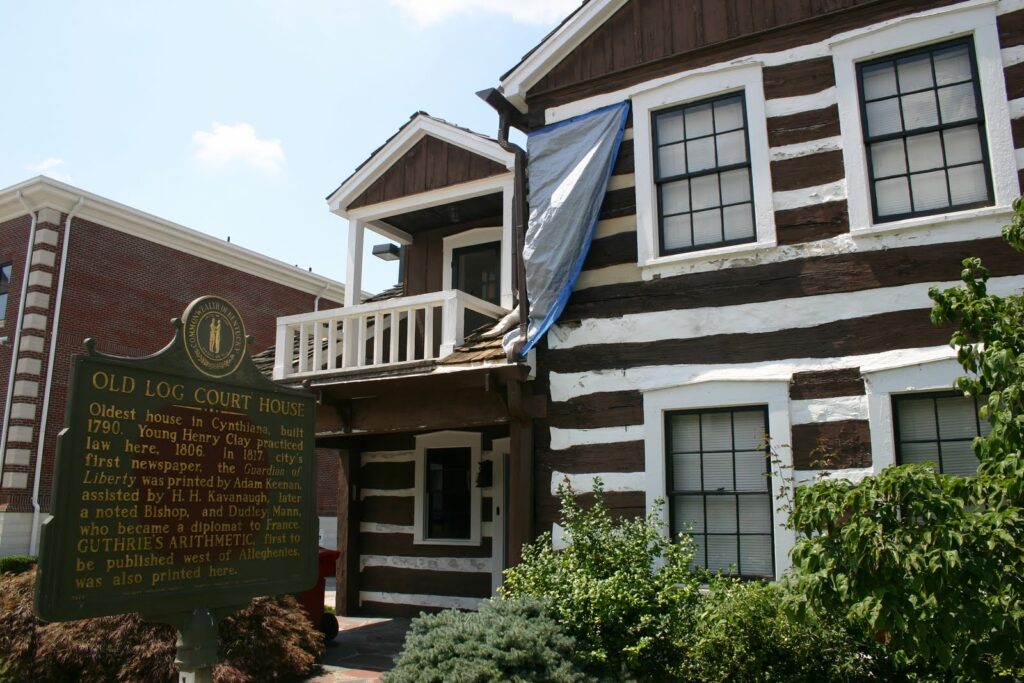 * BONUS PIC FOR PETER – I’ve decided that if I see something that is particularly noteworthy, I’m going to give everyone a bonus picture. This is labeled as the “Old Log Court House”- and has a pretty awesome history. It’s the oldest building in Cynthiana, built in 1790. Henry Clay practiced law here, and both the county’s first newspaper and a notable early arithmetic textbook were printed here.