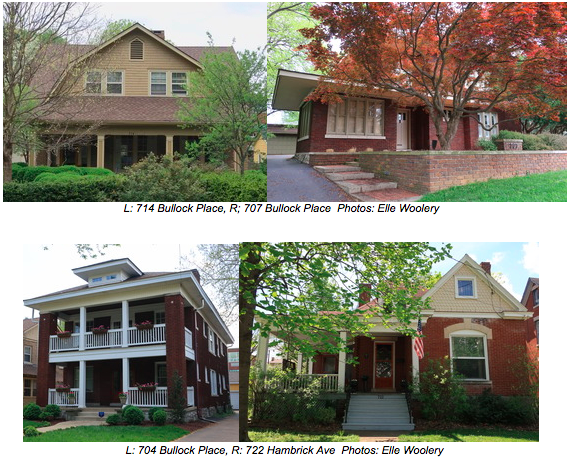 The May “Fab Four BGT deTour” will feature the interiors and gardens of four private residences located on Bullock Place and Hambrick Place.

As you stroll between these properties, be sure to observe the house at 715 Bullock Place as it is the oldest residence on the street. It was built by the adventurer James Masterson on a tract of 100 acres that he purchased from Col. James Wilkerson. Masterson died in 1838 and the property was divided between his widow and five children. This particular acreage came into the hands of Major Robert S. Bullock by 1873.

The first house will be 714 Bullock Place, which is constructed in the Dutch Colonial style. It is an easily recognizable architectural style with its large, front facing gable. The home’s owner in 1953 was J. Monroe Sellers, vice president of First National Bank and Trust Company. That bank is now the Lexington 21c Hotel and art museum.

The prairie style 707 Bullock Place is reminiscent of Frank Lloyd Wright. Prior owners include Albert Ross Marshall (d. 1937) who was a board member of the Petroleum Exploration Co. of Kentucky, S. Sewell Combs (d. 1955) who was the vice-president of the Combs Lumber Company, and Ken Lloyd (d. 2012), the noted Lexington interior designer who refurbished the residence in 1984.

The craftsman style multi-unit at 704 Bullock Place was once the home of well-known Lexington jeweler Harry Skuller, who passed away in his home “after being confined at home for five weeks as a result of a heart condition.” (Lexington Herald, Aug. 31, 1937).  The name “Skuller” can still be found downtown: the well-known Skuller’s clock on the sidewalk of the 100 block of West Main Street.

Two blocks behind Bullock Place is Hambrick Place and the Fab 4 deTour includes one house, 722, on Hambrick. This little Victorian gem has not found its way into the history books in the same way that our other addresses have, but perhaps its bricks will speak to you during the Fab 4 deTour on May 3!