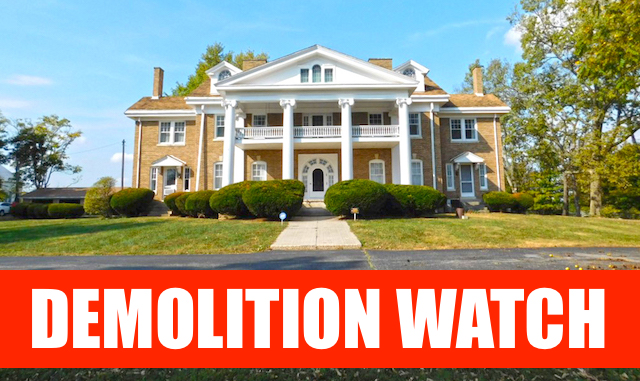 At an auction yesterday, a century-old home on the south side of Nicholasville was auctioned off. The property located at 1201 South Main Street was advertised as including over 32 acres ripe for development. So the question is will this circa 1914 home be standing in a year (or even a month)?

The answer to that question is unknown.

So what is at risk of being demolished? 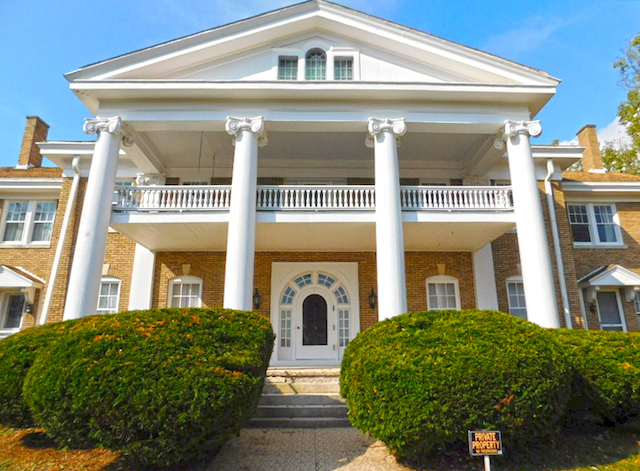 This yellow brick two-and-one-half story Neo-Colonial was built in 1914 by Everett B. Hoover. When added to the National Register of Historic Places in 1977, the house was described as “one of very few examples in Jessamine County of early 20th century styles; it is also one of the best designed and well preserved examples of the Neo-Colonial style in the county.”

Mr. Hoover was the son of William H. Hoover who was the subject of a brief biography in Perrin and Kniffin’s 1887 Kentucky: A History of the State. Of Everett, the authors wrote:

Everett B. Hoover, the third and youngest child, was born October 21, 1860, and like his brother received his early education in the free
schools and at Bethel Academy; in 1877 he entered the Wesleyan College at Millersburg, Ky., where he remained until 1879; then entered Vanderbilt University, where he took a special course of study, preparatory to studying law. In 1880 he entered the Columbia College Law School, New York City, where he remained two years, taking the full law course, graduating in June, 1882. He at once returned to his home and received his license to practice law in August, 1882, and has been a continued practitioner ever since. He married Miss Ella Burnett, of Boyle County, Ky., November 21, 1882. To this union was born Elizabeth Hoover, the first grandchild of William H. Hoover, January 31, 1884. In April, 1886, Everett B. Hoover was elected judge of the city court of Nicholasville, Ky., and was re-elected the following year, of which office his is the present incumbent.

The house was last on the market in 1967 when it was purchased by Charles and Anna Moore. Prior to the Moore’s acquisition, the property served as a sanatorium operated by Charles Fentress.

Charles Moore was a developer in Lexington during the mid- to late- twentieth century. In reporting Moore’s death in 1985, the Lexington Herald-Leader wrote that “Moore built houses in many of Lexington’s major subdivisions and helped develop several shopping centers (ed. including Southland) over the years.” And in 1967, Moore purchased this house as part of a 222-acre farm and then did what he did best: developed the majority of land that sits approximately one mile from Nicholasville’s courthouse. 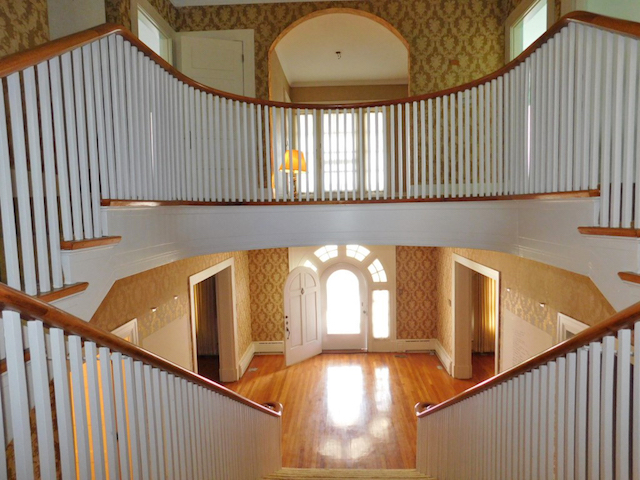 According to a history of the house written by Elexene Cox, the site was also the home to “an equally lovely home on land that was the subject of one of Jessamine’s earliest controversies.” She continued:

After John Metcalfe laid out the town on Sept. 16, 1798, he wrote later to High Sheriff Charles West: We have succeeded amid foolish opposition from County Clerk Samuel Woodson and County Surveyor Frederick Zimmerman in locating our county seat. Woodson wanted it near his residence one mile to the south and Zimmerman wanted it one mile to the north of my survey. We have defeated their opposition. … Woodson’s ‘gem of a house’ had 14-foot ceilings and a hall 12-feet wide.

It was this “gem of a house” that Hoover demolished (at a cost of $150 for “separating all the woodwork, cleaning and separating all the stone and brick in less than a month.”) in favor of the still-present construction.

According to Cox, Hoover hired David Wolfe of Georgetown to build the house which, with “extras,” cost $9,474.

At yesterdays auction, the house and land were purchased for $1,177,000. Hopefully, this historic structure can be incorporated into any new development that might occur on the property. 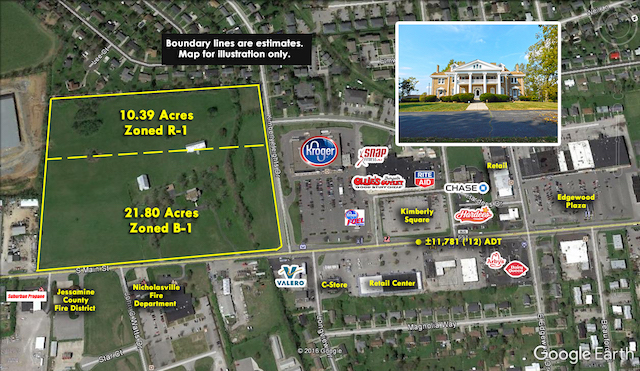 All images were obtained from marketing materials related to the auction of the property by Halfhill Auction Group. As of this posting, additional images of the property are accessible on that website.
UPDATE (11/3/16 at 4:00 p.m.): Communication with one of the purchasers suggest that there are “no immediate plans” for demolition.