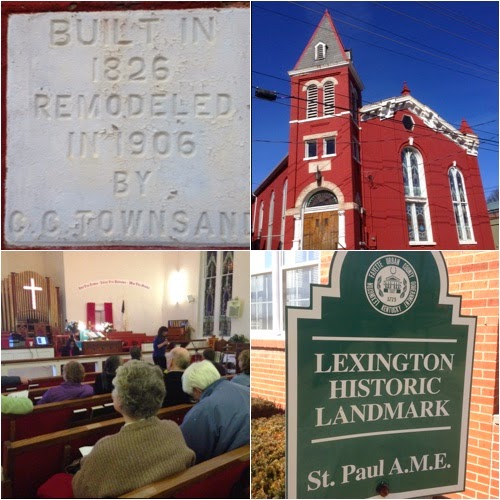 Prior to 1826, a small number of blacks worshipped at the predominately white Lexington Methodist Church which was located “on the north side of Church Street, between Limestone and Upper streets” in the “large two-story brick Methodist Church, built in 1822” according to Wright’s Lexington: Heart of the Bluegrass. In 1826, however, the Methodists congregation aided their black brothers and sisters in the acquisition of an “old stable on North Upper Street.”

That mission on North Upper Street would become, over time, the St. Paul AME Church. This historically black congregation meets in a building that was erected on the site of the original stable in 1826. Today, that structure is said to be the oldest continually used house of worship in Lexington. Over the years, it was expanded to meet the needs of the growing church body. Significant renovations and expansion projects occurred in 1850, 1877, 1906, and 1986.

This historic house of worship was the site of the Blue Grass Trust’s February 2015 deTour.

In 1787, a former slave by the name of Richard Allen helped establish the AME Church in Philadelphia as it split from the Methodist Episcopal Church. Six years earlier, Allen had purchased his freedom. Allen, along with his the Rev. Absalom Jones, regularly worshipped at Philadelphia’s St. George’s ME Church.

The church had separated its colored congregants by having them seated around the room’s perimeter. One Sunday in 1787, Rev. Absalom Jones, however, began his prayers prior to the service closer to the sanctuary’s center. A sexton ordered Allen’s friend to get up and advising that Jones “must not kneel here.” Interrupting Jones’ prayers, the sexton persisted. Jones ultimately responded to the sexton   that he ought to “wait until prayer is over, and I will get up and trouble you no more.”

After the conclusion of their prayers, all of the congregants worshipping at St. George’s rose and departed the church. The moment is perceived as the beginning of the AME denomination.

Methodism in Lexington & the Beginning of St. Paul AME

The decade before, the ME Church began a mission in Lexington which ultimately would become what is today the First United Methodist Church on High Street. By 1803, the congregation had 47 white and 30 black members.

By 1820, several black members sought their own separate house of worship and a mission of Hill Street ME Church was started in a brick stable on North Upper Street. Six years later, the St. Paul ME Church was formally established and the deed to the stable was acquired a year later. In 1830, a small brick church was built (though a portion of the original stable remains in the extant church’s foundation).

The church began to grow both in numbers and in assets as additional property was acquired. Soon after the Civil War concluded, St. Paul (along with another 300 predominately black ME churches) withdrew from what was then known as the ME Church Conference of the South, or simply ME South).

Within a year, St. Paul affiliated with the AME Church. And for many years the church continued to grow and build.

A Pillar of the Community

St. Paul’s legacy extends far beyond its walls. During the era of slavery, the church functioned as a station on the underground railroad. Although not safely accessible today, a narrow twisting staircase behind the chancel rises to a small hidden room above the sanctuary which once served as a place of refuge for slaves on their way toward freedom.

Following the Civil War, the church hosted discussions about the education of black Kentuckians. Members of St. Paul AME helped organize both the Colored Orphan Industrial Home and the Phyllis Wheatley YWCA. An 1885 assembly at St. Paul AME on the subject of black education led toward the creation of what became Kentucky State University.

The Blue Grass Trust for Historic Preservation hosts a monthly deTour for young professionals (and the young-at-heart). The group meets on the first Wednesday of each month at 5:30 p.m. Learn more details about this exciting group on Facebook! You can also see Kaintuckeean write-ups on previous deTours by clicking here.