The event is free and open to the public; parking is available on-street as well as in the parking lot of the Kentucky Historical Society. Please help share pictures from the event on social media with the hashtag #BGTdeTours!

Built in 1798-98, the Old Governor’s Mansion remains one of the oldest executive mansions in the United States. It remained in this role until after the state capitol was moved across the river and the new governor’s mansion was completed in 1914.

Thirty-five governors called this building home while they served the Commonwealth and it also was their workplace until 1872 when an annex was built next to the Old State Capitol.

After the governor moved out, the building both served various official roles and sat vacant for several years. The building deteriorated and after World War II, many considered its demolition.

But Governor Simeon Willis found money in the budget to stabilize the project (no doubt influenced by his preservationist wife, Ida Lee Willis) and the home was fully renovated in 1956. It then became the official residence for Kentucky’s Lieutenant Governor.

More about the Old Governor’s Mansion is available from the Division of Historic Properties.

Kentucky’s third state house was designed by Gideon Shryock. Built from 1827 to 1830, the National Historic Landmark’s design was inspired by the Temple of Minerva. Six massive Ionic columns under a classical pediment convey the strength of the Commonwealth. Finished in Kentucky River marble (aka, limestone), the beautiful structure is even more exceptional on the interior.

A self-supporting staircase splits into a double circular square under the cupola which sheds light on the interior. The chambers of both the House and Senate are adorned with some original furnishings. The entire structure is today part of the the Kentucky Historical Society complex.

More about the Old State Capitol is available from the Division of Historic Properties.

I hope to see you at the deTour. Reservations aren’t necessary, but you can ‘join’ the event on Facebook by clicking below. 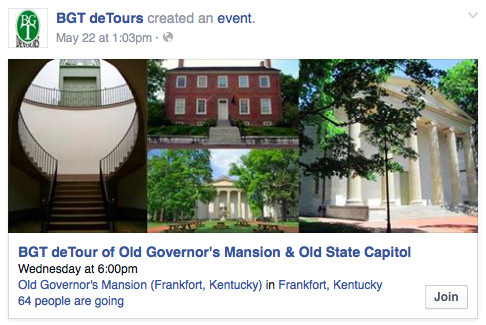