The residence located at 312 North Limestone was commissioned by James Weir shortly before he passed in 1832 “intestate, unmarried, and without issue” according to the papers of Henry Clay. A nephew carried both his uncle’s name and vision beyond the grave so that the house was completed by James Weir (the nephew) by the early 1850s.

The list of craftsman who contributed to the completion of the Weir House is extensive as set forth in Dunn’s Old Houses of Lexington:

Construction costs enumerated by the administrators reveal the interesting facts that William “King” Solomon, James Lane Allen’s hero of the cholera plague of 1833, dug the foundation and latrine; Samuel Long, who build the famous house ‘for two Merino sheep’ for Samuel Trotter, did the carpenter work; Lailey Moore & co. furnished the timbers for Shyrock’s columns, E. Howes did the ‘turning’ and Elliott also furnished materials for the “portico”; J. Enrock and also Seeley had bills for plank and scantling; Eblig supplied the brick, Nixon “blew the well,” and Schakelford furnished the marbling. In addition to the brick for the residence, Ebling supplied brick ‘for the kitchen.’

While some of these names are recognizable in the lore of Lexington history (King Solomon, for example), others are less notable but who undoubtedly had their hand in a number of structures built during Lexington’s rise as the Athens of the West.

The two story, three bay brick Weir House features a “massive double portico” and has a wing on either side. The wings, each two bays wide, were once a single story but were raised to two stories through the years. As noted above, the architectural design is attributed to Gideon Shryock though much John McMurtry completed much of the project.

According to the state’s historic resources inventory, the Greek Revival mansion would have once had a front door in the same tradition “with sidelights and transom.”

At one time, the Weir property encompassed the land from 3rd to 4th streets from Limestone to Walnut. (Nota bene: Walnut is now Martin Luther King Blvd. on the north side of Main Street while “the road to Limestone” referred to what is now called Maysville when passing north beyond Third Street. To the south of Third Street, the townspeople then called the road Mulberry).

When the younger Weir abandoned Kentucky for Texas in 1852, the property passed to Judge Thomas Marshall. Marshall’s vitae included a professorship in law at Transylvania University, four terms in the U.S. Congress, a stint in the legislature in Frankfort, as well as 22 years on the Kentucky Court of Appeals (which was then the high court of the Commonwealth.)

After five years Marshall sold the house to another accomplished lawyer, Richard Buckner, who kept the house an even shorter time before selling the property to a well-known Lexingtonian: Henry T. Duncan, Sr. It would pass through that family and through other hands before it would be received by the family whose name the property today bares: Carrick.

In 1910, Dr. James Cantrill Carrick and his wife, Anna Pearce Carrick, acquired the property at the northeast corner of North Limestone and Third Streets. The couple resided there until Dr. Carrick passed in 1954; in 1955, the house was donated to Transylvania University in 1955. Quickly, Transylvania liquidated the asset to the Whitehall Funeral Chapel. The mansion served as a funeral home for the latter half of the twentieth century. 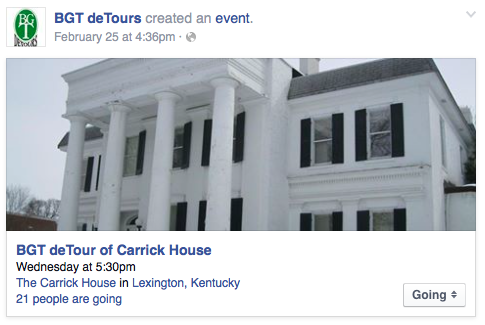 In 2007, Jerry Lundergan acquired the property and it was converted into an event space. A significant addition to the rear of the structure was added in 2011.

Tonight (Wednesday, March 4, 2015)(Update: due to weather, the event is being postponed one week to Wednesday, March 11), the Blue Grass Trust for Historic Preservation’s monthly deTour program will feature a behind the scenes, full-access tour of the beautiful Carrick House. Come explore!

Help Spread the Word: Click here to tell your friends that you’re going to the deTour!