It is rare to find such a plot of land in downtown Lexington, but there is the Parker Place on West Short Street. Once part of a much larger tract owned by Eliza Parker, the grandmother of Mary Todd Lincoln, the land was later acquired by Captain John B. Wilgus.

Capt. Wilgus, a Unionist during the Civil War, led the Lexington Blues. The Lexington Blues was a homeguard unit, the so-called ‘army of last resort’, purposed with protecting the life and property of the Union supporters in the event of an invasion by the Rebels. In business, Capt. Wilgus was active in various efforts and was a successful grocer and banker in Lexington.

In 1870, Capt. Wilgus retained John McMurtry to build, and likely design, an Italianate villa in Lexington’s Western Suburb on land he had acquired in the mid-1850s. Before Wilgus’ acquisition, McMurtry operated both a lumber yard and carpentry shop on the site.

The design included an octagonal room on the two-story villa’s western side – a room that housed Wilgus’ extensive art collection. Following his death, the collection was auctioned off. At that time, the Lexington Leader described the collection as including “rare foreign and American paintings” as well as “the celebrated marble bust and pedestal of Augustus Caesar by Joel T. Hart.”

You may recall the name Joel T. Hart as being the noted Kentucky sculptor, born in Winchester, who spent much of his life in Italy. One of his noted works, Woman Triumphant, was destroyed when the old (fourth) Fayette County Courthouse was destroyed by fire in May 1897.

Capt. Wilgus himself succombed to cancer of the jaw in 1889. His condition had been the subject of the news, as reported on by the Lexington Leader, in yet another reminder of the style of the news from yesteryear: Mr Wilgus “has suffered with a growth on his face … He consented to a dangerous operation to remove the tumor this morning.”

The house itself was sold a few years before Wilgus’ death. It changed hands several times before it was acquired by the Lexington Orphans Society, which being established in 1833, was one of the oldest such societies in the nation. Parker Place served as an orphanage from 1907 until 1975. 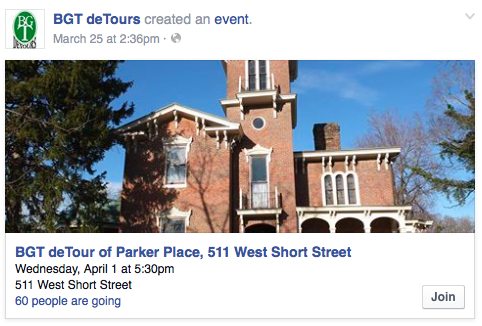 On Wednesday, April 1, 2015, the Blue Grass Trust for Historic Preservation’s deTour program will tour Parker Place. The group will begin gathering at 5:30 p.m. and parking is available behind St. Paul’s Catholic Church or behind the Greentree Tea Room. More details are available here. The event is free and open to the public.

Help Spread the Word: Click here to tell your friends that you’re going to the deTour!