Nota Bene: An article appearing in the Lexington Herald Leader on April 15, 2013 incorrectly identified Peter Brackney as the author of this post; Chris Ertel noticed the classified and experienced this amazing Greek Revival.

In March, I noticed a classified ad for the absolute auction of a farm in Mercer County. The photo showed a beautiful Greek Revival Mansion. I saw this as a unique
opportunity to experience a seldom seen historic site. I went to the open house the weekend before the auction and found a large throng of curious visitors roaming through the house and grounds. 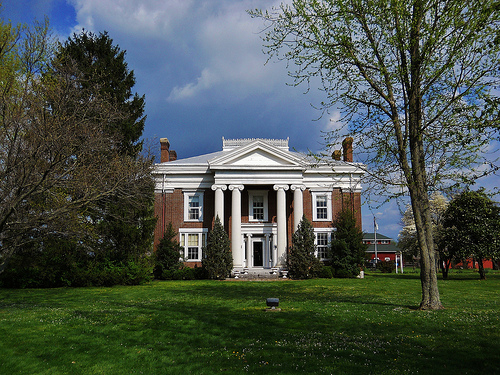 Glenworth was built in 1848 by Robert Mosby Davis on land deeded to him by his uncle, Robert Mosby He was the namesake of his uncle. It was given to him for taking care of his uncle in his old age. The land was originally owned by the Robards family. Lewis Robards married and lived here with Rachel Donelson Robards, later Mrs. Andrew Jackson. Her father Colonel John Donelson was the founder of Nashville, Tennessee. There was a bigamy scandal when Andrew Jackson married Rachel Donaldson Robards before a divorce was finalized and Andrew Jackson was dogged by political gossip throughout his career. The land passed to Robert Mosby through his marriage to Lewis Robards’ sister.

Glenworth is an excellent example of a high-style Kentucky Greek Revival plantation house. It bears a similarity to Fayette County’s Waveland. It is a two story brick house with a full entablature divided into an architrave and frieze. The entablature
rests on paired brick pilasters. It is surmounted by a hipped roof topped with an observation deck enclosed by a cast iron cresting. 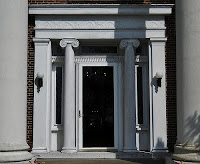 Like Waveland, the façade is divided into three parts with each bay being divided by the paired pilasters. From the four central pilasters projects a pedimented portico with paired Ionic columns. The first floor windows and doorway echo the tripartite theme of the façade with triple windows on each side of the doorway also in three parts.

The doorway features Ionic columns in antis between pilasters
supporting an entablature, forming sidelights and a triple transom. In the frieze are stylized anthemion decorations. The triple windows have simple lintels over them. 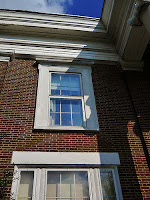 The second floor windows are framed by Greek shouldered architrave moldings crowned by cornices above. This is different from Waveland where all windows on the façade are triple windows.

A two story gallery with square brick piers ran along the back of the house with an exterior stair. It was later enclosed. Behind the gallery is a one story brick ell.

The ice house, shown in the photograph of the rear of the house, is cylindrical with a conical roof like Ashland and many bluegrass estates. The ice house is one of many original outbuildings at Glenworth.

The interior is divided by the central hallway with a pair of rooms on each side. The interior doorways also have anthemion moldings and shouldered architrave moldings. The staircase has a magnificent newel post and ornament from later in the 19th century. An opening with engaged Ionic columns divides the two parlors on the right side of the house. Also visible is the bracketed mantel, more indicative of the style ten years later. The house had minor updates throughout the remainder of the 19th century. 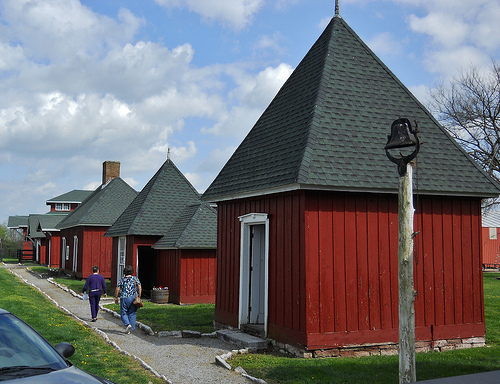 Glenworth has an impressive array of outbuildings. Pictured are an octagonal brick supply house, meat house, frame poultry house, slave quarters. The meat house and slave quarters are of log covered with wood siding. Vertical board and batten construction is used for the wood siding. All the original ones have a hipped roof much steeper than the main house. The last two had gable roofs and probably date to later in the 19th century.

The heyday of the property came at the turn of the century when 20 year old Adam S. Edelen from Danville, a graduate of Centre College rented the farm in 1895 and later purchased it in 1905. Glenworth Stock Farm was one of the most prominent Saddlebred farms in Kentucky. It produced many champion show horses including Bohemian King, Bourbon King, Bourbon Chief and Montgomery Chief. The Saddlebred is a breed created in Kentucky as a plantation horse. It was a favored mount in the Civil War. Due to its showy gaits it became a show horse. The Grand Championships are held at the Kentucky State Fair in Louisville. The farm also raised Jersey cattle, English Berkshire swine and Poland-China swine. His wife, Elizabeth Beard Edelen was known for her elegant entertaining at Glenworth. Mr. Edelen built the impressive 18 stall horse barn around 1910 and the farm manager’s house around 1920. Mr. Edelen sold the farm in 1927. 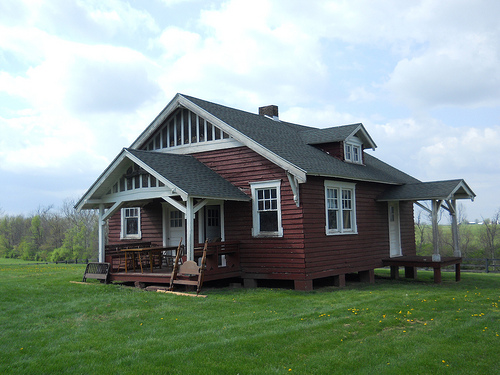 The auction was conducted on March 31, 2012. The house, buildings, and approximately 108 acres sold for $810,000. Hopefully, the new owners will preserve the house, farm and outbuildings for future generations to enjoy.

Only a few of the many photos of Glenworth can be found on this page. For more photographs of this beautiful Greek Revivial, check out these photographs on flickr. 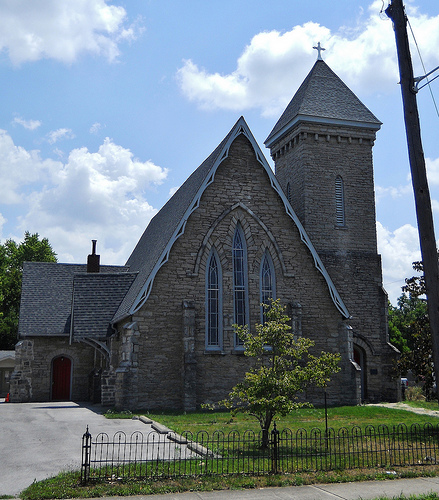 The native limestone façade of the Church of the Advent features a tower with pyramidal roof, steep gable-fronted nave with verge boards inspired by tracery, buttresses, triple lancet windows enclosed by stone pointed arch hood mold. This romantic Gothic Revival church, one of my favorites inspired me to look into a whole group of mid-nineteenth century churches associated with Kentucky’s first Episcopalian Bishop Benjamin Bosworth Smith.

The Church of the Advent was the first Gothic Revival Episcopal church built of stone in Kentucky. It was built beginning in 1855 when the cornerstone was laid and the tower was completed in spring 1860. The plan was said to be taken from a model made by Bishop Smith of St. Giles Parish Church at Stoke-Poges in England. St. Giles was famous as the setting for the poem, Elegy Written in a Country Churchyard by Thomas Gray. A comparison of the Church of the Advent with the actual St. Giles shows, however,t only faint similarities.

The Church of the Advent was one of a number of Gothic Revival Episcopal Churches built through the influence Kentucky’s first Episcopal Bishop, the Right Reverend Benjamin Bosworth Smith. The Gothic style was felt to be the only proper style for a church by Anglicans who were part of the Ecclesiological Movement or the Oxford Movement. This influenced Episcopalians in America to favor the Gothic Revival style for church-building. The style of churches built after Bishop Smith’s model was patterned after the Early English Gothic style of the 12th and 13th centuries which was simpler than the later phases of Gothic, the Perpendicular Gothic and Decorated Gothic styles. This made it adaptable to the small churches designed for Kentucky towns. These churches are reminiscent of English country parish churches, particularly those built of native limestone.

The tower features a Tudor arch doorway with a shouldered hood mold. A Tudor arch is a flattened pointed arch. The stonework for the lower part of the tower is uncoursed stone while the upper part of the tower completed later has the stone laid in courses. Buttresses support outer corners, tall slender single lancet windows are on each face of the upper tower and the cornice has stone corbels under a pyramidal roof.

The Episcopal congregation in Cynthiana was formed in 1835 by N. N. Cowgill, a layman who later was ordained by Bishop Smith in 1838. For several years the congregation did not have its own church meeting and held services in the Methodist, Presbyterian and Christian churches as well as in the courthouse. Two more priests would serve the congregation before Reverend Carter Page in 1850 who would be pastor during the construction of the church. The church cost $6,500 dollars to construct. The lot was purchased by Dr. George H. Perrin who paid for $5,500 of the cost with the remaining$1000 donated by William Thompson. Once the tower was completed the church was consecrated on May 19, 1860 by the Right Reverend (Bishop) Benjamin Bosworth Smith.

During the Civil War, the church would be used for a hospital for the wounded soldiers from the Battle of Cynthiana fought on June 11th and 12th, 1864.

The side porch of the Church of the Advent with trefoil motifs in the brackets and verge boards. Note how acute the angle of the gable is. In medieval Gothic churches the porch was usually enclosed or partly enclosed.

Interior of the Church of the Advent 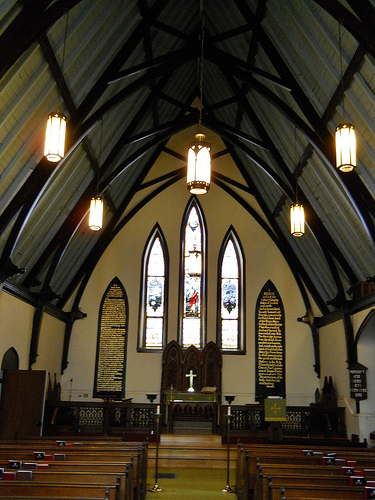 The first thing you notice when you enter the church is the open beam ceiling featuring cross beams supported by arched beams springing from the side walls. Centered on the front and back walls are the triple lancet windows. On each side of the windows on the back wall are the Decalogue (Ten Commandments) and Apostle’s Creed, a common practice in 18th century Anglican churches of Virginia. The Apostle’s Creed uses an early version of the creed from the 1661 Book of Common Prayer rather than that from the 1789 Book of Common Prayer that was commonly used at the time.

An historic pump organ made in 1881 by H. Pilcher and Sons of Louisville is in the transept recess on the right. The organ was electrified in the 1950s.

The church had some minor redecoration in 1899 which included raising the chancel to a platform and adding a wood and cast iron railing separating the chancel from the nave. Lucy “Lutie” Tebbs and several other ladies carved the wood altarpiece and presented it to the church. It is said that she exhibited a large carved wooden pedestal at the Chicago World’s Fair.

The interior window openings are splayed and have original clear diamond-shaped panes. Lancet windows in the Early English Gothic style were usually in pairs or groups of threes. The wainscoting added in 1899 probably was unpainted in natural wood. The original pews have a jigsaw trefoil motif as finials on the top of each end.

I had a wonderful visit to Church of the Advent thanks to B. T. Darnell, Senior Warden. Besides the church stories she shared, she had fascinating stories to tell of her own property which was the site of Ruddle’s Station and the 1780 siege and massacre of settlers there by Captain Henry Byrd and his British and Indian troops during the American Revolution.

I hope to visit the other churches built during Bishop Smith’s tenure and report on them because they are each wonderful romantic churches. These include Holy Trinity Church, Georgetown (stone); St. Philip’s Church, Harrodsburg; Church of the Ascension, Frankfort; St. Paul’s Church, Shelbyville; St Paul’s Church, Pewee Valley (stone); St. Paul’s, Newport (stone). My next visit is to Holy Trinity Church in Georgetown.

I’m pleased to announce that Christopher Ertel will be adding his voice to The Kaintuckeean beginning tomorrow. I’ve known Chris from his tireless efforts on behalf of The Blue Grass Trust and his avid following of our deTours. He is a tremendous resource on the history of the Bluegrass and I’m so excited that he is willing to share with us!

Chris attended Georgetown College before graduating from Middle Tennessee State University with a degree in Historic Preservation. He has restored two homes for himself and consulted on others. He is retired from the Kentucky Court of Justice and volunteers for The Blue Grass Trust’s Hunt-Morgan House and its Antiques and Garden Show. For his work at this year’s AGS, Chris received the Betty Hoopes Award.


Although his broad and diverse knowledge covers much of the region’s history and architecture, his current passion includes the beautiful stone Episcopal churches constructed during the service of the first Episcopalian bishop of Kentucky, Bishop Bosworth Smith. Welcome, Chris Ertel!