Central Kentucky is quickly advancing its stature in the beer community. Danville has become a local leader on the craft brew scene and Lexington’s scene is improving on almost a daily basis. 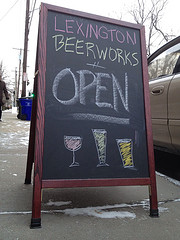 Recently, Lexington Beerworks opened at 213 North Limestone – it is simply “the best place to be for craft beer lovers and brewers.” They have what may be an almost infinite selection of bottled beer and a rotating draft list that features the best beers from across Kentucky and around the world. On my first visit, I got my first taste of Danville’s Lore Brewing Company. Lore’s Winter Coatmeal Stout was rich and dark with a strong oaty aftertaste – quite good! The Lexington Beerworks keeps its followers on both twitter and facebook up-to-date with what is on tap.

Embracing social media and good beer aren’t the only things that Lexington Beerworks is up to. They also know how to pick a great, historic location. Built in 1905, the two-story 213 North Limestone has cast iron columns and rough stone lintel and metal cornices that hearken to the earliest days of the building.

In those earliest days, the building housed the Lexington Ice Cream Company which appears to have been the first such creamery in Lexington. Organized in November 1906 by A. L. Calhoun and others, it quickly became popular. By the summer of 1907, Mr. Calhoun had “built up a good business” and sold it to a H. T. Muir. Muir, a “prominent farm residing on the Richmond pike,” operated the ice creamery under the name Muir & Son so that his son, Chester, might become involved in business.

It would be in August of the following year, 1908, that “while engaged in selling cream in his concessionaire tent at the Colored Fair ground” that Henry T. Muier would be “seized with heart disease and drop dead.” By October, Mr. Muir’s estate would sell at public auction the ice cream and dairy plant to W. I. Hughes. Hughes was quite the entrepreneur with interests throughout downtown Lexington in cafes, confectionaries, creameries and more. He and his sweet tooth also represented Lexington in the state legislature and served on the city’s commission.