Last Friday, the doors of the Lexington Museum Center were indefinitely closed due to “dangerous levels of damaged and deteriorating lead-based paint in the building.” Also cited by the city were asbestos, mold, and structural problems. The Lexington Public Safety Museum, the Kentucky Renaissance Pharmacy Museum, and the Lexington History Museum all call the Museum Center, Lexington’s old courthouse, home. And while these museums each tell a great history, the greatest history at the Museum Center is that of the old courthouse itself. Anyone who has explored the upper floors of the old courthouse knows that the building requires a tremendous amount of work in order to be fully restored and it is disappointing that impediments so great stand in the way of that vision.

The 1898 Richardson Romanesque courthouse is at the heart of downtown Lexington; it is decidedly Lexington’s most recognizable structure. It served as the county courthouse for over a century until the Robert F. Stephens Courthouse Plaza opened in 2002. And although the façade is incredible, the building’s interior is more spectacular. 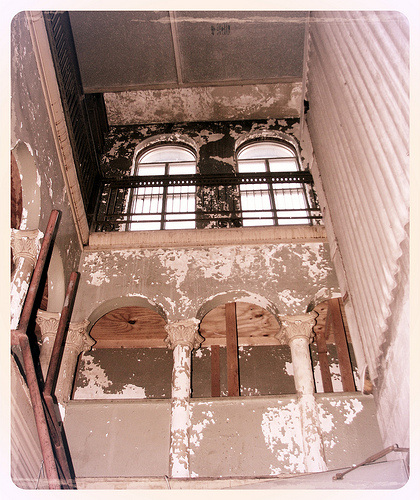 Imagine in circa 1900 Lexington, a 100-plus foot atrium featuring the architecture of a 14th century Tibetan palace above a split steamboat stairway. After remodeling in the 1960s, the dome only reached fifty-two feet above the newly added fifth floor.

Though this fifth floor has not been accessible to the public for many years due to the now-familiar lead-based paint, I’ve twice had the opportunity to explore the upper reaches of the old courthouse. I first saw the detailed beauty, colors, and lights that evidenced Lexington’s world-class architecture in October 2009 while the Lexington History Museum celebrated its sixth birthday. This February, the Blue Grass Trust deTour of the Old Courthouse gave many the same opportunity.

I discussed this funding mechanism at lunch yesterday with the Streetsweeper and he observed a number of issues with that TIF district. As progress on Centrepointe may be on the near horizon, perhaps revisiting our TIF application is necessary. As observed by the Streetsweeper, most of the public infrastructure goals sans courthouse rehabilitation are either completed or scrapped from the final project. Restoration of the old courthouse has also been discussed as part of the Arena, Arts & Entertainment District.

You can also help to save the old courthouse! Donations may be made at www.goodgiving.net or mailed to the Museum at 215 W. Main St., Lexington, Ky. 40507. However we act, we must act to save this key part of our community’s history. As former Governor Martha Layne Collins said, “the focal point [of our] community is the courthouse – the place where so much of Kentucky’s rich and fascinating history has been written…” We can not afford to lose that.