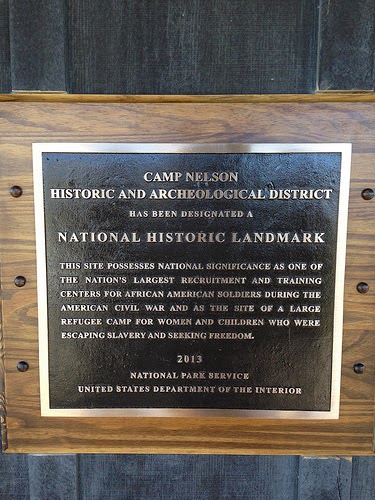 On March 3, 1865, Congress emancipated all the wives and children of the United States Colored Troops who had not been previously emancipated from the bondage of slavery. This occurred following a public outcry when 102 family members of American soldiers died after being expelled from Camp Nelson in Jessamine County, Kentucky.

Slaves had sought refuge at Camp Nelson where men joined the Union army and their families found temporary refuge. Nearly 24,000 African-Americans enlisted at Camp Nelson to join the army and, if they survived, attain their freedom. Federal policy only allowed free blacks or those with their owners’ permission to enlist. That is, until the policy changed at Camp Nelson.

These two stories are significant to our national historic fabric. They contribute to what makes our nation the land of the free and the home of the brave. And they were the focus, along with historic archeology, of the listing of Camp Nelson as a National Historic Landmark.

Dr. Stephen McBride, the Director of Interpretation and Archeology at Camp Nelson, told these two stories to those assembled on Saturday for the Celebration of History and Archaeology at Camp Nelson. The main event was the unveiling of the plaque identifying the Camp Nelson Historic and Archeological District as possessing “national significance as one of the nation’s largest recruitment and training centers for African-American soldiers during the American Civil War and as the site of a large refugee camp for women and children who were escaping slavery and seeking freedom.”

The designation as a National Historic Landmark is hugely significant.

Nationwide, there are only about 2,500 NHLs representing fewer than 3% of properties included in the National Register of Historic Place. (A National Register listing is a sign of a significant historic resource and is, of itself, not easily attainable).

Jessamine County has 72 sites included on the National Register, but Camp Nelson is our only National Historic Landmark.

In other words, this is a big deal! And that’s because each of those two stories at the beginning of this column was a big deal.

Most news articles about the plaque unveiling won’t tell more of those stories than the plaque itself reveals. Instead, news accounts will discuss the politicians who were in attendance and the words that were said on Saturday.

But the significance of this site and of this designation were best told by an unnamed sergeant in the U.S. Colored Troops: “It used to be five hundred miles to get to Canada from Lexington, but now it is only eighteen miles! Camp Nelson is now our Canada.”

In September of last year, I wrote about the historic acreage in southern Jessamine County that was commandeered by the Union troops during the Civil War. The headline read that “Camp Nelson is a Jessamine County treasure.”

That was an understatement. Camp Nelson is a National Historic Landmark. It is an American treasure.

This column originally appeared in the Jessamine Journal.
It should not be republished without permission.