My sister and I embarked on what has become our annual tradition (2018 was our third annual) of cycling through  Lexington’s past and exploring new developments and changes to the landscape in the town we both call “home.”

Our 2018 trek was met with an early disruption as I discovered that my bike lock was still at my house and that going to retrieve it would delay our ride by an hour. After posting my predicament on Facebook, a friend quickly came to my aid. But the five minute drive there and back was punctuated by a quick drive through The Lexington Cemetery, www.lexcem.org, to see the monuments that had recently been relocated there from the courthouse lawn. I had supported the removal of the two Confederates from Lexington’s most premier public space to the cemetery, and the new locations for Hunt-Morgan and Breckinridge are fitting and proper. The monuments are much more accessible having been removed from their lofty pediments.

A bike lock in hand, we proceeded to our starting point (and what should certainly be the start of any Lexington tour): The Lexington Visitors Center, www.visitlex.com. VisitLex recently reopened in the old Courthouse on West Main Street. Construction of the old courthouse began in 1898 and it served as the county courthouse for a century until new courthouses opened on North Limestone Street in 2002. It was thereafter occupied by a number of museums, most notably the Lexington History Museum, lexhistory.org, but all tenants were forced to vacate in 2012 due to lead paint, asbestos, and other environmental factors. A two year, $32 million project brought the old Courthouse to its historic grandeur.

After the visitor’s center, we walked my bike down West Short Street to the nearest available Spin bike on North Mill. Spin, www.spin.fm, introduced its bicycle rentals to Lexington just within the past few months and allow customers to rent bikes for $1 per half hour using a mobile app. My sister, in town for a week, had become an expert in Spin bikes and loved their comfort, affordability, and ease of use. They are certainly a win for Lexington and its bikeability.

We both mounted are bicycles and took off toward the Distillery District, www.lexingtondistillerydistrict.com, where much has changed since our 2017 tour. Most significantly, the James E. Pepper Distillery, jamesepepper.com, is now open for tours. Although our schedule didn’t permit a tour, we were welcomed into their visitors center where a large flag adorns the wall. The flag was found in California and returned to the distillery where it had been flown until the distillery shuttered in 1958. At one point, Pepper was the largest whiskey distillery in the United States. Today, it produces five whiskeys (3 ryes, 2 bourbons) which were fortunate enough to sample.

Our appetites whetted, my sister and I walked next door to the Goodfellas Pizza, www.goodfellaspizzeria.com, to enjoy their $6 lunch special: a huge slice of pie, a side (we each opted for a salad), and a drink (soda, tea, or a Narragansett Lager, www.narragansettbeer.com). Although it was by no means my first time at Goodfellas, it was hers and she is looking forward to returning.

Back down Manchester Street, we turned onto Oliver Lewis Way so that we could reach the next destination: Country Boy Brewing, countryboybrewing.com. It was another first visit for my sister; she and I have twice before reached their door only to find it closed due to my failure to first check operating hours. There is no pretension in this cinderblock building, only good beer. I had their Living Proof: Golden Wild Ale which was tangy and almost like a mild gose; very enjoyable. My sister, a fan of the pilsner, found their Survive to be on the money.

After leaving Country Boy, we maneuvered over to UK’s campus to sample some of the older landmarks like the Gillis Building, the Patterson Office Tower, and the statue of President Patterson. But the real reason for visiting my alma mater was to check out the new $200 million student center. Wow! Just wow. This was definitely not there when I was a student. The new two-story bookstore, operated by Barnes & Noble, is nothing but impressive (though it is remarkable how little space is actually committed to textbooks for a university having an enrollment of over 30,000). The old Alumni Gym has been preserved and repurposed as a student fitness center – it may well be the most beautiful, most well-appointed fitness centers in town.

A race down Euclid Avenue and a left onto Ashland Avenue unveiled one of Lexington’s newest bookstores: Brier Books, www.brierbooks.com. A great selection and an awesome staff. Further down Ashland Avenue, we entered Warehouse Block, warehouseblock.morningsidelex.com. My sister visited with a friend at Centered, centeredlex.org, and we settled into another beer at Mirror Twin Brewing, www.mirrortwinbrewing.com, (we shared Bee Sting, a honey hefeweizen).

We began back toward North Limestone with a brief pitstop to see the bicycle-beer combo at Bicycle Face, bicyclefacelex.com, (a shop I will surely return to). It was a great day for a leisurely 8 mile ride punctuated by so many stops at local shops and watering holes. #sharethelex 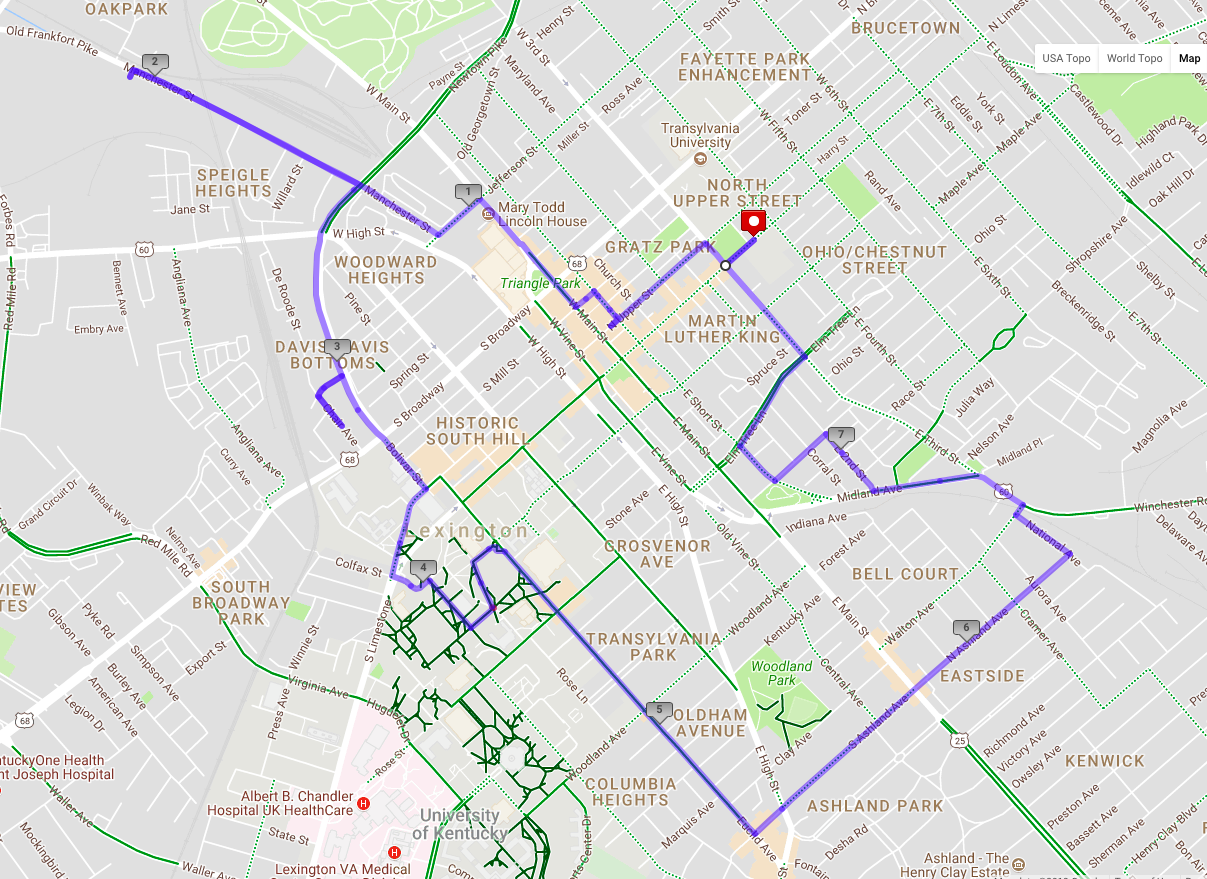