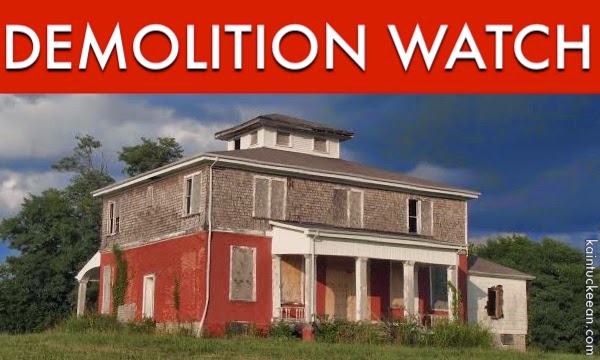 Although a vote to demolish the Handy House (aka Ridgeway) was taken last November by the Harrison County Fiscal Court, the demolition of the historic home (located in a city-county park) requires approval of both public bodies. A joint public meeting tonight of the Fiscal Court and the City of Cynthiana will provide citizens with the opportunity to show your support for preserving our history! The meeting is May 12, 2015 at 6:30 pm in the old Harrison County Court House on Main Street!

If you can’t make the meeting, please stand up and be counted through this online petition:

The home was listed earlier this year by the Blue Grass Trust for Historic Preservation as one of the 11 Endangered Properties in Their 11th Hour. Last November, Cheri Daniels penned a guest post here that told the history of this important structure. Here are some highlights of that history:

The history of the house is quite remarkable. As mentioned above, the original owner was U.S. Congressman and War of 1812 Veteran, Colonel William Brown. He was an attorney and close friend of Henry Clay. Both served in the 16th Congress, which established the Missouri Compromise. Colonel Brown’s wife, Harriet Warfield, was the sister of Lexington’s Dr. Elisha Warfield. He is well known as the owner of the famed racehorse Lexington and as the physician who delivered Mary Todd Lincoln.

Thus began the Brown family’s connection to the Todd/Lincoln families. As Kentuckians migrated west, many families moved into the Illinois territory. The Brown family began this move as did some of the Todds. At this time, Colonel Brown was also leaning toward an anti-slavery stance, despite owning 30 slaves at Ridgeway.

As he relocated his family, he freed his slaves and brought a few of them along to work as employed free men. The sons and nephew of the Colonel got caught up in the Black Hawk War and fought alongside another new Kentucky emigrant, Abraham Lincoln. The comrades in arms formed long lasting friendships, and Lincoln accompanied the Brown family men back to their new property to help clear it after the war, alongside Ridgeway’s former slaves.

As the years went by, evidence of Lincoln’s friendship with this family can be found in many ways.

When Lincoln was running for office for the first time in 1858, he wrote to the Colonel’s son (Capt. James N. Brown), assuring him of his stance on slavery:

I believe the declara[tion] that ‘all men are created equal’ is the great fundamental principle upon which our free institutions rest.

After Lincoln’s assassination, James was personally selected by Mary Todd Lincoln to serve as one of Abraham’s pall bearers on the final leg of the body’s journey in Springfield.

You can read the rest of Cheri’s post, which contains more background on the structure, the threats to its survival and its plan for the future by clicking here.

If you go:
Joint Meeting of City/County Governments
Old Courthouse in Cynthiana
Main Street
6:30 p.m., May 12, 2015

If you can’t go:
please stand up and be counted through this online petition: