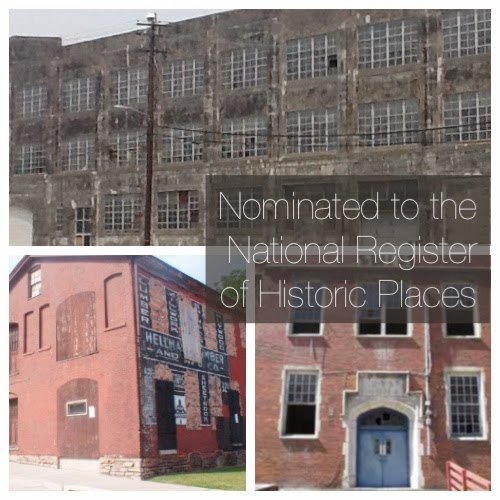 Yesterday, I profiled 3 of the 6 sites recommended for inclusion on the National Register of Historic Places by the Kentucky Historic Preservation Review Board. The sites were:

Below, I’m briefly going over the last three properties on the list: the Louisville, Gas & Electric Co. Service Station Complex, the Hellman Lumber and Manufacturing Co., and Elkhorn City Elementary and High Schools.

All 6 nominations which will be forwarded to the National Park Service (NPS) for final determination of eligibility. A decision on designation will be rendered within 60 to 90 days.

Also known as the Edison Building, this gas and electrical service station was constructed ca. 1924. It stands on a 4+ acre lot at Louisville’s 7th and Ormsby, and all of the acreage is included in the nomination. Even before 1924, the site’s utility was related to generating power.

The main structure is cube-shaped and constructed primarily of poured cement. The south façade is the most decorated of the four sides and it is divided into 9 bays. The three-story structure was built with the potential of expansion to 8-stories, but demand was never realized for the additional square footage. A red brick gate house, ca. 1890, also stands on the property.

On Covington’s 12th Street, stands the Hellman Lumber and Manufacturing Co. This warehouse was built from 1886-1894 and the company is one of the community’s oldest businesses dating to 1879. Without a doubt, many of Covington’s structures have been built with wood that has passed through this facility.

The nomination form describes the main warehouse as “an intact two-story two-bay side-gabled brick warehouse-style corner commercial building that is approximately 14,000-16,000 square feet. The original foundation is wet-masonry limestone.” The building and its story represent an intact representation of the era’s booming lumber industry.

Near the heart of Elkhorn City are its schools with the complex (6.8 acres) including 6 structures, of which 3 are contributing to the historic character: a 1938 WPA high school, a 1956 elementary school, and a 1956 music instruction building.

Elkhorn City lies in Pike County about 20 miles from the seat of Pikeville. During the academic life of these buildings as academic facilities, 1938 to the 1980s, the manpower required for coal mining increasingly declined even when demand was high due to mechanization of the process. The nomination form provides that “These facilities demonstrate a continual dedication to public education within this rural Kentucky community. Their existence displays a successful development from rural school facilities into a modernized educational system.”

And finally, a little bit more about the National Register of Historic Places:

Owners of National Register properties may qualify for state and/or federal tax credits for rehabilitation of these properties to standards set forth by the Secretary of the Interior, as certified by the Kentucky Heritage Council, or by making a charitable contribution of a preservation easement. National Register status does not affect property ownership rights, but does provide a measure of protection against adverse impacts from federally funded projects.

The National Register is the nation’s official list of historic and archaeological resources deemed worthy of preservation. Kentucky has the fourth-highest number of listings among states, at more than 3,300. Listing can be applied to buildings, objects, structures, districts and archaeological sites, and proposed sites must be significant in architecture, engineering, American history or culture.