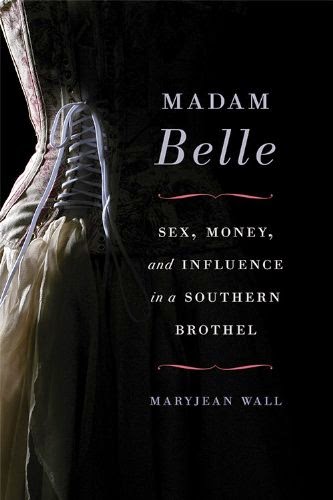 Belle Brezing died in 1940 and her business had closed some twenty-three years earlier. Despite the passing of years, Ms. Brezing remains in the conscience of Lexington and a part of our communal lexicon.

was published and the book is filled with colorful and illustrious characters just as were Brezing’s brothels. Wall tells the story of a business-savvy woman who had risen from the most difficult of circumstances.

Belle’s first sexual encounter was with Dionesio Mucci; both lived in the Western Suburb, but they were not contemporaries. Belle was only 12 years old, while Mucci was in his thirties. By the age of 15, Belle was both an orphan and a mother with “few prospects for the future.”

In 1879, at the age of 19, Belle entered the employ of Jennie Hill who operated a brothel in what had been the childhood home of Mary Todd Lincoln. Within two years, Belle opened her own “house of ill repute.” It would be the first of several she would own, each being more lavish than the one before.  She also shifted operations from the west end of Lexington to the city’s east end.

Clients included big names in horse racing, breeding, politics and business. Judge John Riley, a police judge, took interest in one of Belle’s prostitutes before marrying the girl. Her connections to the law aided her in keeping out of trouble and when trouble found Madam Belle, but a pardon from the governor came in handy after an 1883 indictment.

Wall’s ninth chapter – ‘Crackdown on Vice’ – begins with almost a vilification of James Ben Ali Haggin and his manager, Charles Berryman, for “advocating a new moral code for Lexington.” The beginning of the 20th century was a challenging one for Belle Brezing and the other madams of Lexington.

Belle’s final brothel, which remained her home during her twenty-three year retirement, was auctioned off after her death in 1940. In 1973, the house burned closing a tangible reminder of Belle’s influence in Lexington.

But her legacy remains clearly visible and Madam Belle provides a thoroughly researched and enjoyably readable account of this Lexington legend and the community in which she lived.

Published by the University Press of Kentucky, Madam Belle is available at all purveyors of fine books.

Disclaimer: The author was provided a courtesy copy of this book. This review/assessment followed.