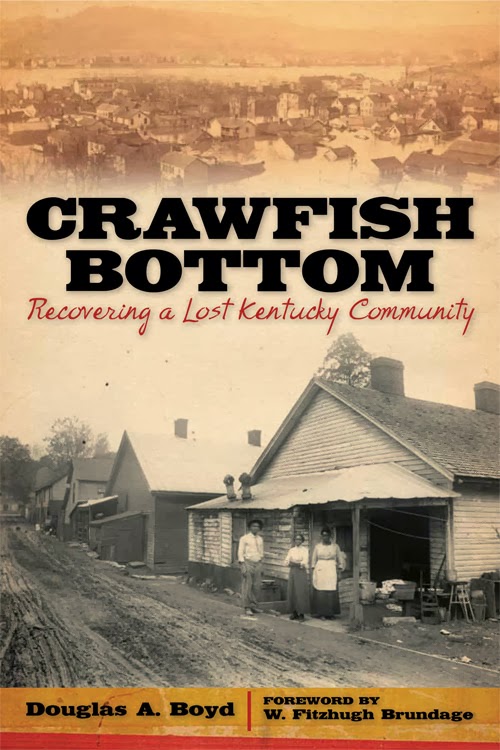 Here, brothels were commonplace for generations. Here, alcohol flowed freely before, after and during prohibition. Here, crime was inherent and living conditions deplorable.

And it was all in the shadow of the old state Capitol.

Douglas Boyd explored the lost community of Crawfish Bottom in his book, Crawfish Bottom: Recovering a Lost Kentucky Community. It is now available in paperback from the University Press of Kentucky.

Since the Commonwealth’s earliest days, Frankfort has been our capital. Seated on the Kentucky River, the community had a history interwoven with the river. Lumber would be transported by water with the mountaineers accompanying it. Receiving their pay in Frankfort, these men might be interested in partaking of the local flavor.

And as the state capital was home to the state penitentiary, felons upon release might seek the pleasures they were unable to access from the cell block.

It was entirely natural, then, that a seedy area would develop in Frankfort. Its proximity to the river (adjacent to and partially in a flood plain, as evidenced by the regular flooding) created a natural fit for the area which was generally viewed as being to the west and north of the old state Capitol.

Professor Boyd examined this swampy land through the eyes and voice of her people utilizing and relying to a great degree on oral histories prepared in 1991 by a University of Kentucky master’s degree candidate. Through Boyd’s expert pen and insight, a history of the people who lived in the Craw is told.

For those who lived in this area, it represented a great deal more than the prostitution and crime that occurred here. It was a community with churches and schools and stores and commerce. Race was less divisive than elsewhere in the capital city as residents were “more unified … by their socioeconomic condition … than they were divided by their race. Blacks and whites lived together [and] everybody looked out after each other.”

And so “for the overwhelming majority of residents interviewed, … the Bottom was a safe place for them and their families to live.”

Boyd drew on the memory and nostalgia of displaced residents to approach the concept of urban renewal from their perspective. Nostalgia “is a feeling or expression of longing, in the present, for a more positively associated place or time imagined in the past, a phenomenon that introduces” outside distortion, yet is now accepted as being “critical to understanding embedded meaning in historical interpretation.”

Whether or not the methodology historical recordation is deemed appropriate, Boyd’s use of nostalgia draws readers to a deeper understanding of the daily lives of this locality.

And after all, as Charles Joyner wrote, “all history is local history somewhere … still, no history, properly understood, is of merely local significance.” Yes, the reach of the Craw extended beyond its mere fifty acres.

Long were attempts to rid Frankfort of Crawfish Bottom and the urban renewal effort finally struck a final blow to the entire neighborhood in the 1960s when space was made for the new state office tower and plaza. Ridding Frankfort of its “slums” was deemed a positive, despite whatever sense of community was lost.

The area is a microcosm for the efforts to alter the nation’s urban cores — efforts which began in earnest during the middle portion of the last century and continue today.

Boyd’s book received great accolades in hardcover and readership should increase now that it is accessible in paperback among those interested in virtually any of the social sciences.


Disclaimer: The University Press of Kentucky provided the author with a courtesy review copy of the book here reviewed. The amazon.com link to the reviewed book is part of an affiliate agreement between the author and amazon.com.