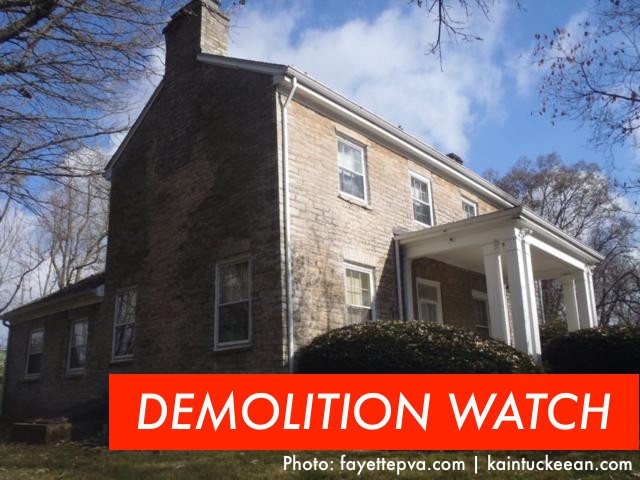 The four-bay, two-story John Bell House at 460 Greendale Road is the latest addition to our Demolition Watch. Added to the National Register of Historic Places in 1983, this residence was built in the first decade of the 1800s and is recognized as one of the early stone buildings of central Kentucky. That status is noted in Lexington’s 2007 Comprehensive Plan (p. 302).

In Clay Lancaster’s 1955 writing on Rural Residence of Fayette County, the subject property was included in a short list of the early stone houses. Describing that list, Lancaster wrote that “they are not numerous.”

John Bell, the son of Revolutionary War Captain David Bell, was born in Virginia in 1758. He had this property, known as Stoneleigh constructed and from here sold both hogs and cattle throughout the South according to the papers of Henry Clay.

Upon Mr. Bell’s death in 1835, the property was sold to former U.S. Senator and Mississippi Governor George Poindexter who had abandoned Mississippi to practice law here, in Kentucky. Eventually, Poindexter would return to Mississippi.

Perhaps one of the most interesting tales relating to Poindexter occurred when he was living in Washington, D.C., and retained the services of Richard Lawrence for the painting of his residence there. A few months after the paint had dried, Lawrence became the failed assassin of President Jackson. Jackson accused Senator John C. Calhoun of South Carolina as well as Poindexter of conspiring in the assassination attempt. Although there was no evidence connecting either senator to the crime, Mississippi failed to return Poindexter to the Senate. He immediately came to Kentucky.

The property passed through the hands of Winfield Bullock, too, before being acquired by John Webb in 1848. The property remained in the Webb family’s control until earlier this year.

The Road to Demolition?

The present concern involves the transfer of the 12.4 acres on which this historic property resides to BT-OH, LLC on June 29, 2016 for $1.15 million. BT-OH is a Delaware limited liability company formed in 1999 as a subsidiary of United Parcel Service, Inc. It is believed that the acreage is valuable to UPS not for its historic value, but instead as a parking lot. When the property had been listed for sale, the presence of a historic brick building was not noted. Signage seemed to indicate only acreage of developable property.

A demolition permit has yet been applied for as of the date of this writing, yet the property remains at risk. It is not located in an H-1 historic district, but a stone wall on the property should be enough to warrant a demolition hold to be placed on the application once it is sought.