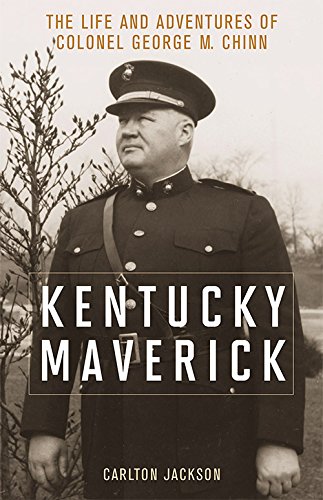 Published posthumously by the late Professor Carlton Jackson of Western Kentucky University, this biography of Colonel George M. Chinn is a must-read for those who appreciate Kentucky history. Chinn was active in so many aspects of 20th century Kentucky and, though he is a figure often overlooked by many, is worthy of honor and recognition.
Colonel M. Chinn was described as a Renaissance man which is an accolade that always piques my interest. As put in the book, Chinn had “‘multiples lives,’ and … excelled in all of them: football player (baseball, too, when called upon), coach, tour guide, restauranteur (in his cave), government sergeant at arms, civil rights leader (except the time he rejected the collection of black newspapers, bodyguard, military man, weapons expert, librarian, author, director and deputy director, [Kentucky Historical Society, head of military museum in Frankfort, raconteur, and, overall ‘good old boy.'”
Yes, Colonel Chinn (a military rank, though he no doubt also was a member of the Honorable Order as well) was both a Renaissance man and a maverick. His story, as told by Jackson, is an informative tale of Kentucky’s history during the 20th century and an even more informative tale of how that history is told.
As director (and deputy director) of the Kentucky Historical Society, Chinn was regularly called upon to interpret and guide the telling of Kentucky’s story. One way he accomplished this was through the development of the historic marker program which has successfully (albeit with more than a handful or errors) told about Kentucky’s people and places in nearly 2,500 spots along the state’s highways.
But Chinn was quick to point out that most of the historic markers placed were in central Kentucky, which mirrored the “blue blood” makeup of the historic organizations including KHS. China sought to broaden the reach and scope of the organization by reaching out to those in the western and eastern reaches of the Commonwealth. Further, Chinn’s qualifications made him not a ‘professional historian’ which left him at odds with many, including the esteemed Dr. Thomas Clark.

Chinn’s service in World War I, World War II, the Korean War, and the Vietnam War were all discussed leaving no doubt of the Colonel’s commitment to America. His understanding of weaponry – described by Jackson as a “primitive genius” – kept him active in the Marine Corps, despite a weight that far eclipsed the Corps’ standards. China developed the M-19 automatic grenade launcher during the Vietnam conflict and which weapon still was in service during the recent conflicts in Afghanistan.

And when not overseas or away from home, Chinn retired to his wife, Cotton, at their Mercer County home which overlooked the palisades. The home’s construction and design, as described in Kentucky Maverick, was unique. But Chinn’s time was spent below the home in his cave that opened up onto Highway 68. There he engaged in many entrepreneurial efforts – both legal and illegal.

Reading Kentucky Maverick: The Life and Adventures of George M. Chinn contains many interesting stories that are beautifully woven together into an interesting read. Jackson gives the reader a better understanding of the history behind the Kentucky Historical Society and an appreciation for how politics can seep into everything.

And as we approach autumn and a new football season, I truly enjoyed the full accounting of the great game played in Cambridge when ‘underdog’ Centre from Danville defeated the mighty Harvard – C6, H0 – in the game of the century. But whether you anticipate the pigskin or not, the stories of this Renaissance man will intrigue any Kentuckian.

Disclaimer: The author was provided a courtesy copy of this book. This review followed.