At least one colleague and friend discovered my interest in history through last week’s Herald-Leader article by Cheryl Truman. To my luck, the avid baseball fan and history buff had an 1873 map of Kentucky which he has graciously given to me. It originally belonged to his grandparents, and he knew I would appreciate it. 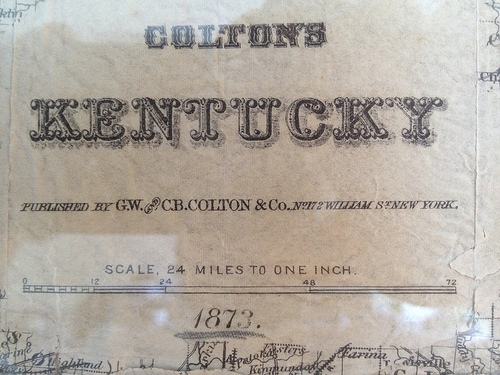 The 1873 map was published by G.W. and C.B. Colton & Co. of No. 172 William St., New York. I’ve reached out to noted New York bloggers and amateur historians, The Bowery Boys, to see what they knew about the cartographers or their locale in the early 1870s? So far, I got nothing. But a study of their website does reveal a picture from 1859 of William Street, which today runs from the foot of Brooklyn Bridge near Pace University downtown to Broad Street. 172 William, near the intersection with Beeker, is now predominated by Downtown Hospital. Here’s what it looked like a few years before the Coltons published by map from two blocks uptown:

I learned that J.H. Colton was an internationally recognized cartographer from 1831 to 1890. His two sons were brought into the fold in the early 1850s: George Woolworth Colton and Charles B. Colton.

G.W. and C.B. It looks like the two sons published the map which is seemingly unique. There are many Colton maps spanning multiple decades which combine Kentucky and Tennessee, but I’m not finding one of just Kentucky. Truly unique, at least per the University of Alabama’s historic map collection.

Do you have any information about this map?